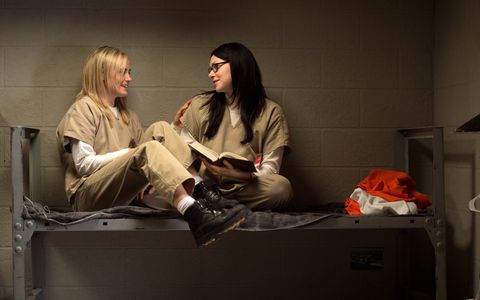 What Happened: A romantic Tiffany "Pennsatucky" Doggett imparted same game-changing wisdom while driving the prison truck—whenever you phrase a sentence like "I'd [blank] your [blank]," it's a guaranteed turn on. Her example: "I'd zip his sweater." Sexy!

The Lesson: "I'd light your crack pipe." See? Works every time.

2. You should totally forgive that girl who snitched on you and got you thrown back into jail and also double-crossed you in season two.

What Happened: Piper Chapman was reunited with her on-again-off-again lover Alex Vause and reacted just as you'd expect a pair of pissed off exes would —Piper embraced Alex, and they later made out.

The Lesson: Forgive and forget. No matter how many times you get dicked over by a certain person, doesn't mean they'll do it again. Nope, don't feel bad about misplacing your trust over and over. You are making smart life choices. In jail.

What Happened: It was Mother's Day at Litchfield and during the festivities the visiting kids sweetly punched a strawberry piñata violently throughout the day, until correctional officer Wanda Bell bashed it open with her bat. Since she "forgot" the candy, the kids were rewarded nothing. Inmate Brooke Soso considered the moment an analogy for life.

The Lesson: Try all you want, but the moment you think you've succeeded is when you've lost. There are no rewards in the game of life, only cold, unforgiving emptiness. Now, where's the candy?

4. If the eggshell breaks on you during a Santeria spell, then, welp, you're done for.

What Happened: Santeria expert Gloria Mendoza was performing a spell on an inmate, when the ritual's key ingredient—an uncooked egg—broke midway through. Gloria pretended it was an accident, but we all know better.

The Lesson: Simple: Eggs determine your fate. Heed their warnings.

What Happened: Aleida Diaz told her daughter Daya about the joy of being a mother—you know, like, how babies basically end your life and forever ruin the way things work, ahem, down below. Meanwhile Aleida's adopted daughter, Maritza Ramos, enjoyed getting to see her child for the day—until the kid pooped. Oh yeah, and one of the prison moms found some time to snort drugs delivered via her baby's diaper. HAPPY MOTHER'S DAY, YOU GUYS!

The Lesson: Babies may suck, but they'll make up for it by functioning as powerful vessels for concealing and transporting your drugs.