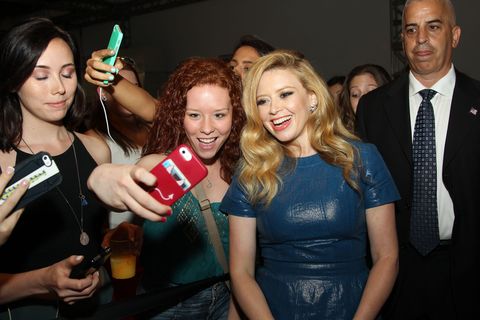 The cast of Orange Is the New Black is hardly recognizable out of their prison uniforms, but they interact with each other just as hilariously off screen as they do behind bars. The ladies of Litch sat down with Marie Claire editor-in-chief Anne Fulenwider during yesterday's #OrangeCon fan event in New York, and spoke at length about secrets from set, the show's social consciousness, and their on-set bond. Spoiler alert: general amazingness abounded.

Here's what we learned.

Sex scenes between Piper and Alex are the opposite of awkward

Are we really surprised that a fan asked Laura Prepon if filming sex scenes with Taylor Schilling is awkward? Not so much. Her answer, however, wasn't what we expected. Turns out the duo's first intimate moment was a shower scene in the pilot, and it went off without a hitch. "It was amazing, honestly," Laura said. "Taylor and I—I don't want to speak for you, girl—but our chemistry is so amazing and we're so comfortable with each other."

"The fact that we all really support each other and it's this amazing sisterhood, it gives us that confidence to really be vulnerable, and be raw, and really put ourselves out there because we know we're always going to have each other's back," she added. "It's no different between those kinda scenes that Taylor and I have together versus all the other scenes we do together, we're just there for each other."

Don't expect Larry and Piper to get back together

Piper Kerman may have married real-life Larry, but that doesn't necessarily mean her TV alter-ego is saying "I do" to the man in her life (thank God).

"My marriage is not a spoiler alert" -- @Piper #OrangeCon

Taryn Manning was arrested a couple of days before being cast

How's this for irony: Taryn Manning was arrested just days before landing the part of Pennsatucky on OITNB. "I went to jail and a few days later I got the part," she shared with the audience. "Nothing that I'm proud of, again a mistake. I think in our show, violence isn't the answer, but we all hit a threshold in our lives. It changed me and the show has changed me."

Just *some* of the diehard
StarPix for Netflix

The original description of crazy eyes is crazy-accurate

Fulenwider asked Uzo Aduba how she prepared for playing Crazy Eyes, and it turns out she got a great read off the script description. "When her character was introduced in episode two, they had a description of her in the script that read something to effect of 'she is innocent like a child, except children aren't scary,'" Uzo said, adding that the description "immediately drew this image in my brain of a woman with a pacifier in her mouth and a sledge hammer in her hand." Sounds about right.

Piper Kerman wishes she could undo her past

Orange Is the New Black is an enormous critical success, yet Piper Kerman still wishes she could have a do-over. "I would go back in a heartbeat and change all of my choices," she told a fan. "The experience of incarceration is deeply traumatic. Despite the fact that it turns into something so engaging as this amazing show, I put my family through hell. The people who loved me the most suffered a great deal, as do all families of people who are incarcerated. And most of all, my own choices furthered other people's substance abuse and addiction, and all of the suffering that goes along with that."

"I would go back in a heart beat and change all of my choices. The experience of incarceration is deeply traumatic" @Piper #OrangeCon

The cast is proud of their huge social impact

OITNB has had a positive impact not just on the American prison system, but in the LGBTQ community—and the cast is deservedly proud. "So many of our fans are seeing themselves through these characters on the show," Laverne Cox said. "Being a trans woman playing a trans character that has affected so many people in positive ways all over the world, it is the best blessing in the world...you guys are making change happen by just living visibly and being yourselves. You are the change."

Lea Delaria also spoke about how OITNB is redefining roles that are commonly stereotypical. "Butches have never been portrayed positively," she said. "Finally, someone has put a really positive face on a butch character. Big Boo's not only smart, she's the smartest person in that prison. She loves everybody. She says it herself: She's a lover not a fighter."

Orange Is the New Black's third season is available for streaming now. And get this: The cast starts filming Season 4 on Monday!

Piper Kerman, Michael Harney, Anne Fulenwider, and Taylor Schilling
StarPix for Netflix
This content is created and maintained by a third party, and imported onto this page to help users provide their email addresses. You may be able to find more information about this and similar content at piano.io
Advertisement - Continue Reading Below
More From Culture
See Inside Julianna Margulies's Personal Library
Could 'Manifest' Come Back for a Fourth Season?
Advertisement - Continue Reading Below
The Most Unmissable Movies of 2021 (So Far)
The Eternal Sunshine of Juno Temple
Let's Talk About That 'Virgin River' Cliffhanger
Zendaya Shared a Teaser of 'Euphoria' Season 2
'Ginny & Georgia' Season 2: Everything We Know
Wait, Where's Hope in 'Virgin River'?
'Virgin River' Season 4: Everything We Know
The Greatest Comedy Series of All Time