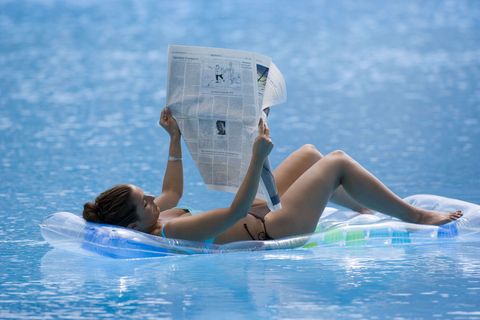 —The Katy Perry convent-buying saga continues—she and the nuns are going head to head (which is a phrase we never thought we'd write) over ownership of the Sisters of the Immaculate Heart of Mary Retreat House. Initially the sisters had sold it to a restauranteur, only for the Archdioses to claim they don't have the right to sell it, and that they're going to sell it to Katy Perry instead. (The Hollywood Reporter)

The Sisters of the Immaculate Heart of Mary Retreat House, which Katy Perry is trying to buy for use as a private home.
Getty Images

—Officials have confirmed the first American measles death in 12 years—a woman in Washington died of the infection earlier this year. (Huffington Post)

—BP is paying nearly $19 million in a settlement over the 2010 Gulf of Mexico oil spill, the largest U.S. environmental settlement ever. (New York Times)

—Abs do not (necessarily) a box-office hit make—Magic Mike XXL is underperforming in ticket sales its opening weekend. (Variety)

—Reddit is absolutely freaking the f*ck out. After Victoria Taylor, coordinator of the site's much beloved AMAs, was mysteriously fired this week, many of the site's major subreddits have been shut down by moderators in protest. (Gawker)

—One of the world's most expensive restaurants, Per Se in New York City, has agreed to pay its staff the $500,000 in tips it had previously withheld. (Reuters)