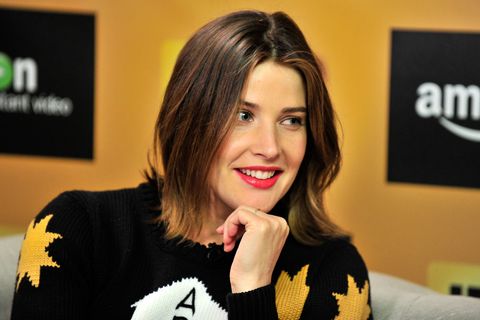 Unexpected, in theaters now, is a different kind of surprise, I'm pregnant! movie. For one, the indie flick isn't a silly rom-com starring a Jennifer (Lopez or Aniston). And second: at its core, it's about female friendships. Cobie Smulders plays Samantha, an inner-city school teacher who befriends one of her students, Jasmine, when they both learn they're going to be moms sooner than, well, expected. And, spoiler alert, it's beautiful. Really funny, emotional, and authentic, too. We called up Smulders to talk expecting when you're un-expecting.

Marie Claire: Something that keeps being brought up when talking about Unexpected is that it's about the experience of pregnancy but from the perspective of two friends rather than a romantic relationship. What could you explore with that set up that you couldn't have otherwise?

Cobie Smulders: When you're having a child with a partner it becomes about your journey together with this child, and when you're able to talk to a friend, more honesty comes up. Jasmine and Samantha are both going through pregnancy but pregnancy is different for everybody, everybody has a different experience, it's very hard to pin down exactly what it's going to be like. These two women are relating to each other and there is a more honest conversation that happens. When you're going through it with a partner it's about the baby, and it's about this new life you're bringing into the world. When you're talking to somebody who is actually pregnant at the same time you're talking about your day-to-day, what you're feeling emotionally, physically, more about yourself than you're talking about the baby.

MC: On paper, Samantha is the most prepared to become a mom, but Jasmine seems the most comfortable—while Samantha freaks out.

CS: I also love that Samantha comes in and she's like, I gotta help this kid out because I'm the adult, and at the end, Samantha is realizing that she's the one that needs to examine her life and her wants and what this next chapter is going to be for her. And Jasmine's in a situation where she is around kids all of the time. She's helping raise her sister's kids and they're all living together, and Samantha's from a place where her friends aren't having kids yet even though they are in their 30s. Everybody is so career driven and focused on, you know, I gotta fill out this box, and this box, and this box, and then I can think about having children. In Jasmine's case, it's kind of like, I'm having a kid, I gotta roll with this, and I feel like the roll with this approach is just a much better approach when you're having kids because you can't ever plan for it.

MC: And you were pregnant while filming, right?

MC: Were there any real-life experiences you were able to insert into the script?

CS: It was kind of strange, because this is a film, I was asked to be different types of pregnant throughout a day. In the morning I was three months and by the end of the day I was eight months. Either we were trying to hide my belly or we were trying to add to it, so the physicality helped but it also sort of hurt sometimes. But I think—I was thinking about this, sort of watching it in its entirety, and it didn't really spring to mind while we were shooting—that me being pregnant lent itself probably the most to the other characters in the film. For Anders Holm, who was playing my husband, to be working with an actress who was actually pregnant, I'm sure, is a much different experience than somebody who was wearing a fake belly. I feel like it probably affected that dynamic more than I realized at the time. And even with Gail Bean, who plays Jasmine, actually talking to her and about the stuff I was dealing with in terms of my real pregnancy. For me, personally, I was like, Let's just get through this.

MC: Could you relate to Samantha's guilt-fueled tug-of-war between wanting to be a mom and not wanting to giver up her career and, in part, her identity?

CS: Oh my God, yeah. I'd like to meet the woman who doesn't and go, How'd you do that? Because it is a balance. It's about balance and just sort of getting through each moment and trying to make the right decision in that moment—and sometimes you do and sometimes you don't. It's a hard job. A stay-at-home mom is a working mom. Being a stay-at-home mom is a job. When you also want to do stuff that keeps you creatively fulfilled or you have to work because of your financial situation, that's just the dynamic of your life. It's hard, but it's just about being able to do your best day-to-day and trying to make the right decision.

MC: Anything you learned through the role?

CS: The experience of pregnancy—it depends on your situation, but it can be quite isolating. It was so beautiful to be in a film where these two women were interacting and sharing and having this experience together. There is something beautiful about that. I worked through my entire pregnancy. And you kind of get caught up in working, so it was nice to shoot a movie about pregnancy and to live in that world for awhile and enjoy that because then it's over pretty quickly.