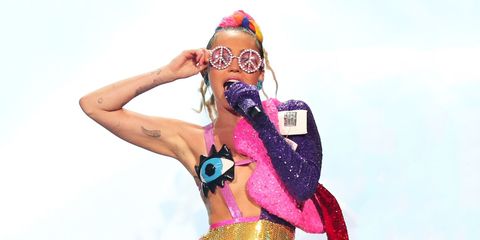 Now that we're finally coming down from the aftershock of the VMAs, our number one priority is diving into Miley Cyrus' new experimental album, Miley Cyrus and Her Dead Petz, which she dropped Beyoncé-style at the end of the awards show.

The full, self-released record—a collab with The Flaming Lips boasting 23 tracks—is available to stream for free. So, while you go about your workday, press play on the weird, wacky, and rainbow-fueled  world of Miley. And if you're in the mood for some trippy visuals that are decidedly NSFW, watch her new music video for "Dooo It!" below: