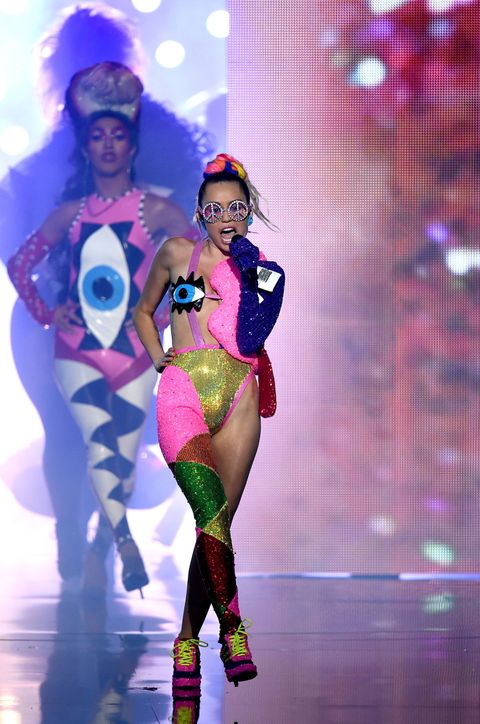 Well, it happened. At the end of Miley's eye-catching performance where she proudly proclaimed she smokes pot and likes peace, the VMAs host and wearer of many outfits announced that her newest album, Miley Cyrus and Her Dead Petz, would be available to download FOR FREE.

But that's not the only thing Miley was passing out for free that night. Cyrus, holding an MTV Moon Man for hosting, joined the press room where she gave photographers and journalists a chance to, well, take some of the edge off just like Kanye.

"I'm sure all of us have known each other for a really long time," she said to the press room, according to ELLE. "Because even though I'm not old, I've been doing this shit for a while. And because you're all my friends and my song is kind of sort of about marijuana/the love of humankind, I brought a little joint if anyone would like any." Holding the joint in the air, she asked again, "Anyone?" (Some photogs ended up indulging.)

She then returned to the press room bearing avocados. Don't think too hard about it.

To get the album, simply head to MileyCyrus.com. It's like Christmas, Miley style.

Samantha Leal Senior Web Editor I'm Sam, the senior editor at MarieClaire.com.
This content is created and maintained by a third party, and imported onto this page to help users provide their email addresses. You may be able to find more information about this and similar content at piano.io
Advertisement - Continue Reading Below
More From Celebrity
Prince Harry Is "Really Upset" Over Philip's Death
Will Harry & Meg Attend Prince Philip's Funeral?
Advertisement - Continue Reading Below
The Queen Is Hopeful Prince Harry Will Return Home
Prince Charles Visits the Queen at Windsor Castle
Harry & Meghan React to Prince Philip's Death
Prince Philip Will Not Have a State Funeral
What 'The Crown' Got Wrong about Prince Philip
Touching Things Queen Has Said About Prince Philip
Your Guide to the Current Royal Line of Succession
Why Wasn't Prince Philip a King?