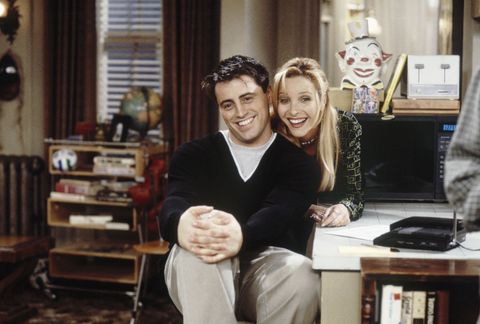 Ross and Rachel were always destined for each other. Monica and Chandler just felt right. But what about poor Joey and Phoebe? Despite a few kisses now and then during Friends, that couple just never worked out—and it turns out the actors wish it could have happened, too.

Lisa Kudrow and Matt LeBlanc, who are both nominated for Emmys this year, reminisced about their Friends days in an interview with People this week. And it turns out that the Phoebe/Joey thing was tantalizingly close to happening.

"Towards the end we actually pitched the idea that Joey and Phoebe had been having casual sex the entire time," LeBlanc said. "We'd go back and shoot all the historical scenes and just before a moment that everyone recognizes, there's Joey and Phoebe coming out of a broom closet together. But they were like, 'Nah.'"

It's definitely depressing that this never happened. But now that you know this tidbit, just pretend it was always the case on Friends next time you binge-watch. Just imagine the two of them were hooking up every time Ross and Rachel had yet another "will they or won't they" thing going on, and things get way more interesting.

Advertisement - Continue Reading Below
More From Culture
Pre-Order These Amazing Books Coming Out in 2020
Jenna Dewan's BF Reacts to Channing Tatum's Drama
Advertisement - Continue Reading Below
The Best Korean Dramas of All Time
Mainstream Movies With * A LOT * of Nudity
Things Between Victoria F. and Chase Rice Got Ugly
Who Are the Women of 'The Bachelor' in 2020?
Rosalía Is the One to Watch at This Year's Grammys
Sydney From the 'Bachelor' Knows Hannah Brown
The 10 Hottest Movies on Hulu Right Now
'The Bachelor' Has Already Finished His Season