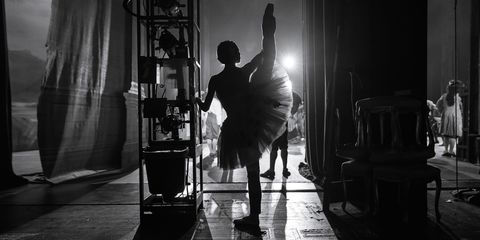 It's hard to imagine a physical endeavor more difficult than ballet. (Ask any professional football player who's forced to take a class—as they sometimes are, to improve agility on the field—and you'll hear more whines and groans than you'd ever imagine in a locker room.) Perhaps that's why it's such an appealing art to watch for so many people who have never tried to actually do it—you know there's no way to achieve elegance like that without exceptional discipline, pain tolerance, training, and physics-defying faith.

That's what makes Isabella Boylston so special. At 28 years old, she's the world-renowned American Ballet Theatre's youngest principal dancer, having been promoted last year to the company's highest rank. She is, essentially, the perfect ballerina—a strong, lithe body articulated by beautifully arched feet; an ability to rise above the challenging technique to feel—and project—genuine joy.

Boylston's rise was meteoric, not that you'd ever know it from talking to her. The Idaho native has a warmth and humility that are at complete odds with her skill. She's earned the right to be a diva, and in record time. There have certainly been many before her. But for Boylston, the focus is on her work.

"Your mind is in your body," she told me recently about the craft—the day-in, day-out machinations of plié, tendu, dégagé over and over and over again. "That's what I love about the ritual of taking class every day. It's almost like meditation."

Boylston and her colleagues spend every morning, including weekends and holidays, warming up in the studio, putting their muscles through limit-pushing exercises unrelated to anything they're performing on stage that night.

"There are a lot of challenges, like working through pain," Boylston says. It's easy, as a viewer, to miss the fact that a dancer is doing twelve counterintuitive things at any given moment to create what you see—keep stomach lifted, tailbone tucked under, legs turned out (from the hip, not the knees), arms supported (by the back, not the shoulders), neck relaxed, expression pleasant...and this is merely for standing still in first position. Even the smallest of these repetitive acts can cause injury over time.

This makes physical therapy such a constant that the company has a dedicated department in-house. Injuries are thought through, mapped out. "I've had patellar tendonitis and a swollen ankle, and I have a problem with my right knee—chronic tendinitis for years," Boylston says. "My knees seem to be my weak area. Something I have to think about when I'm working: Work evenly, working intelligently. It's taken me years to learn my body."

ABT stages roughly 115 performances a year, and often the ballets overlap each other—Giselle alternates nights with Othello, Cinderella intertwines with Theme and Variations. That means rehearsal schedules are a bit of complicated choreography unto themselves; Boylston could rehearse as many as three different ballets in one day, all with distinctive characters and styles.

The transition from her status as soloist to her status as principal means Boylston is cast in more leading roles more often—this year alone she danced the trifecta of career-defining parts: Giselle, Odette/Odile in Swan Lake, and Aurora in Sleeping Beauty. "Natalia Makarova"—the legendary Russian dancer—"said those are the three roles that make a ballerina," Boylston told me between rehearsals. "So I guess I became a ballerina this year!"

With it, Sleeping Beauty brought something particularly prized in the professional dance world: the opportunity to originate a role in a world premiere production. ABT artist in residence Alexei Ratmansky, a celebrated choreographer, wanted to reimagine the ballet—but in its original form. "Alexei unearthed the original notes from the original Sleeping Beauty, and photos and relics, at the Harvard library," Boylston says. "He and his wife learned how to read the dance notation, which is like musical notation but different, and so we're doing it in the style it was first choreographed in."

The ballet got an 1890s overhaul, meaning no stunt-y legs up to here, no flashy pointe work. In the end, it becomes more about personality than panache.

As is often the case in ballet, simplifying the steps makes the work a lot more difficult—everything has to be cleaner and more precise. And this is where Boylston's star shines brightest. This may be one of the world's most difficult ballets—nearly three hours from beginning to end, with multiple pas de deux and the notoriously nerve-wracking Rose Adagio, in which Aurora must balance on the two-square-inch toe of her pointe shoe for minutes at a time—but she seems undaunted.

"I used to get very, very, very nervous before going onstage," Boylston says. "When I did my first Swan Lake, which was my dream role always, I had very little experience, and oh my god I was so nervous. I was crying before the show—I was trying to get my makeup to stay on."

"But the more performances I get to do the less nervous I am about them. Now it's more like...hyper-focus." The quiet before a show is ritualistic in the same way that morning class is—you're on your own, going through the motions of preparing for something big.

And when she makes her entrance, Boylston beams. Stepping out from the wings, she's 16-year-old Aurora, sweet and shy and feeling pretty for her birthday party. Maybe it's Boylston's own youth that makes her so charming and believable as a teen, but she's a breath of fresh air—a modern girl in an 1890s world.