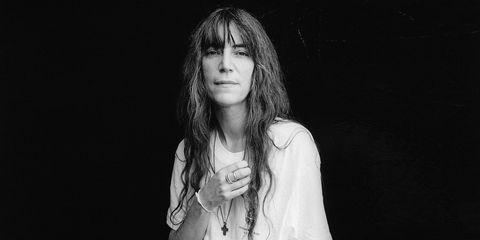 Patti Smith is and always has been our dream coffee date. She not only shares our  addiction to the stuff, but, as her memoir Just Kids taught us, she has about a million and one stories to tell, and some killer offhand wisdom to impart in the process.

The coffee date thing is still a pipe dream, but a close second? Being a fly on the wall for the intimate hour-long conversation Smith had with Esquire editor-in-chief David Granger at our offices yesterday.

During their candid discussion, Smith spoke about new memoir M Train (out now), the triumphs and pitfalls of fame, the best advice she's ever received, her favorite cup of coffee in NYC, and other must-hear tidbits. Like...

On how she dreamed up M Train: "This book, I had no agenda. I had such a strong agenda with Just Kids. I had so much responsibility. Robert Mapplethorpe asked me to write it the day before he died. It was about a time long past. Many of the people in the book are dead, and the city itself has changed so much. I really had to be responsible to the city, to Robert, to all these people, and to the sense of chronology. I just wanted to be free. I had a dream that triggered a certain notion, and then I decided that I was going to write and write and write until my brain said, 'Done.' It was some kind of mystical cake. It doesn't say, 'Put in the oven for an hour.' When it's done, it's done. It could be six months or three years. It found its way."

On her favorite music lyric ever: "I think the single greatest lyric was written by Michael Stipe, which is 'It's the end of the world as we know it, and I feel fine.'"

On how fame has change since she first came into the spotlight: "The cult of celebrity in the '60s and '70s was really more reserved for movie stars or high socialites. Paparazzi didn't care about Janis Joplin. They were looking for Jackie Kennedy or Rudolf Nureyev and I lived in the Chelsea Hotel, and all these people, whether it was Salvador Dali or Janis Joplin or the Allman Brothers, we were all staying in the same hotels. We all dressed the same. We all listened to the same music. We were all against the Vietnam War. There was kinship and you didn't have that same cult of celebrity, and you didn't have everybody wanting to take everybody's picture. We were just all people."

On her love for New York City: "New York is a great city. There is no question of that. It's such a diverse city. I've walked down the city and heard four or five different languages simultaneously. I think that's beautiful. There is hardly a place in New York that you can't walk a block and a half and get a cup of coffee. Believe me, I've been all over the world. There's no place like that but New York City."

On how New York City has changed: "But it certainly isn't the city that I knew when I was young. It was a bankrupt city. We had no money. The city was bankrupt. It was filled with cockroaches, a lot of rats. It was a bit gritty. It was cheap to live here, really cheap. You could have a bookstore job and have a little apartment in the East Village. There were so many of us, so many like minds. You can't do that now."

On her greatest "fame" moment of all time: "I can absolutely say [it was] the last concert that we did in September 1979. We were playing in Italy and rock 'n' roll had been banned in Italy for quite some time. We might have been the first band to play when they lifted this ban. We played in a soccer arena for 80,000 kids in Florence, Italy. It was my last concert, because I was leaving public life. No one knew I was leaving public life. To see that many people…it was just us, just my little band. But I decided, since I was leaving, 'What should I do with my microphone? What should I do with my guitar? What should I do with my amp? What should I do with my stage?'  Well, we gave it to the people. It was always my belief that rock 'n' roll belonged in the hands of the people. Not to rock stars, but to anyone who wanted to express themselves. It's a very visceral, primal way to express one's emotions. So I invited the people to come take my microphone, take my guitar. And they came. The whole stage was filled with kids singing. They just took over everything. And then I left. That was my goodbye."

On taking a break from fame: "I felt that I had accomplished what I had desired to accomplish in the arena of rock 'n' roll. The only place I could go then was to get more rich, more famous. Or just rich, because I hadn't quite made it yet. But I didn't see personal growth. It was such a stressful, demanding lifestyle. Such a spoiled lifestyle. And exciting and fun, but it was so geared to success that I didn't feel I was growing as an artist. I loved being a rock 'n' roll star. I love rock 'n' roll. It was an honor. But really it wasn't what I wanted in life. What I wanted in life always was to write something as good as Pinocchio. I wanted to write. I wanted to evolve. I wanted to grow. So part of it was love, and part of it was self-preservation."

On being asked what the greatest day of her life was: "That is really, in a certain way, unfair to three. When I shut my eyes, it has to be my wedding night, the birth of my son, and the birth of my daughter. If I'm not allowed to have three, then I would just say, the day I was born, because I'm so happy to be alive."

On what she's proudest of: "My kids. A lot of people say that, but I say it because truthfully, and my kids know this, I never really wanted to be a parent. I never wanted kids. I just wanted to be an artist. I never even thought I would live long enough to have kids. I figured I would suffer, die young of consumption or something like that. I was prepared for that. But I met my husband. He really wanted to have children. I thought, 'OK, I can do that.' I helped raise my siblings. I'm a responsible person. I never dreamed that I would love these kids so much. I'm quite proud of them. They magnify their father. They teach me things. I just like them."

Smith performing with her daughter and son during a benefit concert for Covenant House Michigan in 2013.
Getty Images

On the best piece of advice she's ever been given: "My favorite piece of advice came from William Burroughs. I met him when I was quite young and he took me under his wing. He told me, 'Always keep your name clean.' We all make mistakes and we do things that might be wrong, but in choices, if you want to be an artist, if you want your work to be meaningful, then don't compromise it. Don't compromise your name. Basically, keep your name clean. He was more talking about work. That was good advice. Sometimes we get offered things or things come our way that are hard to walk away from because they're so tempting or maybe it's something we don't really believe in, but it's so much money. I always think about that. What would William do? I'd say that was a pretty good piece of advice."

On her favorite cup of coffee in NYC: "There's an Israeli café called 12 Chairs. They make coffee. It's not really great, but it's not horrible. It's just a good cup of black coffee. It always tastes the same, I can always count on it and it's always hot. I don't require a lot of gourmet stuff. Often, with gourmet coffee, somebody goes to the trouble to make gourmet coffee but it's only lukewarm or it's too strong. I like really hot coffee, and not too strong. Twelve Chairs fits the bill."

On her style icons: "We didn't have the phrase 'style icon' when I was young. But I'd have to say, I really copied Bob Dylan when I was younger. A lot of Bob Dylan, the French symbolist poets, and Catholic schoolboys."

On an average day in the life of Patti Smith: "I get up. If I feel really out of sorts I'll do some exercises or something. I wash my face. I feed my cat. In the book I had three cats, but two of them have passed away. I go out and get my coffee and take a notebook and write for a couple hours. I roam around. I try to take long walks and things like that. I just kill time until something good is on TV. I know that some people have different personas for the things they do, and I'm not criticizing that. It's probably a good thing. I'm the same old person. I take everything in stride. I might start the day like that and then realize I have to go. I have to be in Berlin to give a medal to Joan Baez. Then I go and do it and I look for coffee there and write. I just mosey through life."

On looking back and reflecting on her body of work: "All I can say is, anything that I do, if I put it out into the world, I do the best I can. If I look back at it, I can cringe and say I had so much hubris or I'm singing through my nose, I'm so nasally. But I always know that that girl did the best that she could at that time in her life. That's all you can ask of yourself. By the way, that's what I tell my kids, too. Do the best you can."

Smith before opening for the Rolling Stones in 1978.