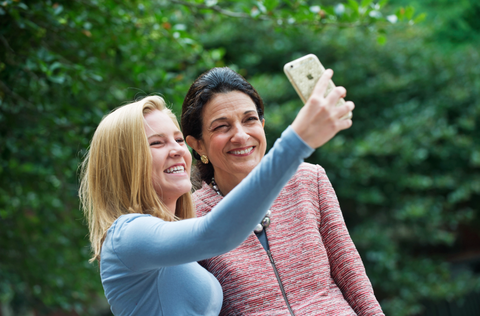 It takes a lot of confidence to be a lone bipartisan voice in Congress. In her 18 years in the U.S. Senate, Olympia Snowe (R-Maine) was famous for crossing party lines to get things done. She had to develop a thick skin in order to withstand her critics—she was even lampooned on Saturday Night Live.

Such experience taught Snowe that being self-assured is an essential part of leadership: "[Being in] public office means putting yourself out there," she says. And yet, because of a lack of self-esteem, by middle school, girls are 25 percent less likely than boys to say they like taking the lead. "It's sad because they have so much to achieve, but they don't feel that way," Snowe says. "We've all gone through it, but can we find a way to help them avoid those feelings?"

By middle school, girls are 25 percent less likely than boys to say they like taking the lead.

To that end, in November, Snowe began enrolling 10th-grade girls in her home state in the Olympia Snowe Women's Leadership Institute, which she initially funded using $1.2 million in leftover campaign cash. Throughout the three-year program, the students will define their values and strengths, develop communication skills, and craft plans for their futures—all of which is designed to boost their assuredness to the point where they see themselves as leaders.

Snowe's team will track the students' progress and use that information to develop a curriculum to be used nationwide by any state that wants to start a similar program. "We're hoping to establish a national model for enabling girls to recognize their gifts," she says. And who better than Snowe to show them the way.

Kayla Webley Adler Features Director Kayla Webley Adler is Features Director at Marie Claire magazine, where she edits the monthly print news and politics section (called News Feed) and writes narrative features, often at the intersection of women’s health and politics.
Advertisement - Continue Reading Below
More From Culture
How Murtagh Dies in the Outlander Books
What Happened to John Finlay From 'Tiger King'?
Advertisement - Continue Reading Below
'Outlander' Season 5 Is Back to the Show We Love
The Best Cooking Shows on Netflix
The Wildest Reviews of Joe Exotic's Zoo
What Happened to Doc Antle from 'Tiger King'?
Is Joe Exotic Still in Jail?
What Happened to Dillon Passage from 'Tiger King'?
Julia Louis-Dreyfus Has All the, Uh, Right Answers
Just 41 Wildly Funny 'Tiger King' Tweets