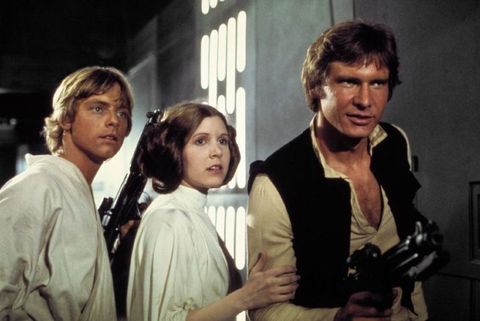 In case Darth Vader's gaggle of Storm Trooper bros didn't tip you off, Star Wars is a man's world. Or, at least it was. Sure, the original trio of films from George Lucas featured Princess Leia as a strong lead (let's go ahead and gloss over her problematic slave costume for now), but the rest of the female characters were peripheral at best. Basically, the franchise is one epic Bechdel fail.

Vulture compiled every line spoken by a female character other than Princess Leia, and the result? A depressing 63 seconds out of 386 minutes. Oh, and there are only three women that actually have speaking parts. Even more depressing.

The new Star Wars seems to have a slightly more feminist-forward attitude, with Daisy Ridley front and center and Carrie Fisher reprising her role with the franchise's potential sexism in mind. But even so, Star Wars has a long way to go before it evens the playing field. Meanwhile, Princess Leia's just all...