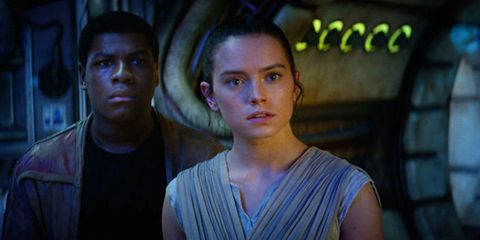 We saw it, you guys. And it was good. Like really, really, really good. So good we aren't going to tell you what happens because that would be dumb. It's a thrilling, clever, gasp-filled, awesomely explosive, perfectly paced two hours and 16 minutes that should be enjoyed without spoilers.

We can say this: Things aren't as great in the galaxy far, far away as they were when we last saw it. There isn't an Ewok in sight. Princess Leia is now General Leia, leading the Resistance in its efforts to stop the First Order from, well, destroying everything. The First Order is fueled by the dark side of the force and led by Supreme Leader Snoke, a sort of bigger, scarier Wizard of Oz type and the Darth Vader to his Emperor, Kylo Ren. Oh, and there are still daddy issues, of course.

The movie is filled with enough knowing side-glances, quips, and cameos (hi, shrimp-y dude!) to delight any Star Wars fan—it's clear that director/co-writer J.J. Abrams is a Star Wars geek and we're all the better for it—while being exciting and fresh enough to turn any n00b onto the force. And that's thanks, in part, to its stellar next-generation cast: Daisy Ridley (she plays Rey, unquestionably our new Luke Skywalker), John Boyega (as Finn, the former Stormtrooper turned forever crush), Oscar Isaac (the fast-talking Han Solo-esque Resistance fighter Poe Dameron), and Adam Driver (the masked, immature—he's prone to temper tantrums—dark-side devotee with a secret Kylo Ren).

So, since we can't exactly say what goes down, here's a preview of all the feels you'll feel, in order, while watching Star Wars: The Force Awakens.

2. Oscar Isaac is beautiful. Funny, too. See: his first on-screen encounter with the First Order. The script isn't afraid to poke a little fun at itself—and the characters aren't afraid to poke fun at each other—which is perfect for breaking the tension surrounding what's actually at stake in the film. Isaac is your eye candied comic relief.

4. Wilson from Castaway? There's a moment during the opening fight scene in which an injured Stormtrooper runs a bloody hand across another's white helmet. It's a subtly poignant moment in which we learn Hey, maybe not all Stormtroopers are bad. After all, they're basically The Unsullied from Game of Thrones. But, really, you think: this guy.

5. Oh, that's Adam Driver! The bad guy. The one in all black. With the red light saber. Kylo Ren. That's the dude from Girls under that Darth Vader 2.0 mask.

6. "I'm kind of into him—are you writing down that I'm into him?" Actual thing my friend whispered to me.

7. Me too. Kylo Ren stalks around with super swag. (Not to mention Driver's performance—which, dreadfully brilliant.) I mean, yeah, so he uses the dark side of the force and definitely needs some anger management therapy but whatever. Lady boner alert. Sorry not sorry.

8. Brienne of Tarth, fuck yeah! To hear Gwendoline Christie's voice coming through the shiny chrome helmet of Captain Phasma, the captain of The First Order—hell, just hearing a woman's voice come through a Stormtrooper's helmet at all—is unexpectedly thrilling.

11. Han Solo's still got it. From the wise-cracking to that cocky grin to his signature fall fashion look (leggings tucked into boots, obvs). If you were, say, taking notes, you might write down something like, "Would still hit it."

12. I wish I could do the Chewbacca growl. Hi, Chewie!

15. Lupita Nyong'o plays Maz Kanata, a tiny 1,000+-year-old wrinkled alien lady who looks like E.T.'s grandma. I don't know how to feel about this.

16. We want more Princess Leia. Carrie Fisher is a goddamn national treasure and while her role is essential to the action, and played gracefully by Ms. Fisher, she doesn't get quite as much screen time as Harrison Ford.

18. Back to Kylo Ren. Adam Driver's hair looks flawless under that mask. Which forces you to ask: Why is he wearing it? Didn't Darth Vader just need it to breathe? Give the people what they want, Kylo. LOL, JK: Kylo doesn't give us a goddamn thing we want.

21. Yas queen! Reminder: Daisy Ridley/Rey is the badass hero we've been waiting for.