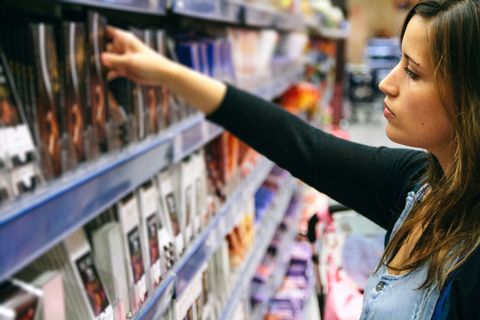 Some women already make less money than men for doing the same work. And now, a new study has confirmed what women everywhere have long suspected: there's a tax on women for buying products that are marketed to them. Can't we win, just once?

New York City's consumer affairs division released a study last week called "From Cradle to Grave: The Cost of Being a Female Consumer," and the results will make you furious. Researchers compared 800 products that had clear male and female versions, and found that on average, a product for women cost seven percent more than the same product marketed to men. And across the entire list of products, women's items were priced higher 42 percent of the time.

Here are just a few examples:

This study suggests that over her lifetime, a woman will spend thousands of dollars more than a man does to buy similar products. The reasons for the price disparity are complex, and can sometimes involve pricier ingredients or differences in taxes. Or it might just be because companies think they can get away with it. The city is calling on retailers and manufacturers to reconsider how they price their products. But at the end of the day, a razor is just a razor, even if it's pink rather than blue. So when you're not busy taking down the patriarchy for charging women more, take a moment to peruse the men's razor aisle to save a few bucks.

This content is created and maintained by a third party, and imported onto this page to help users provide their email addresses. You may be able to find more information about this and similar content at piano.io
Advertisement - Continue Reading Below
More From Culture
When Will 'The Crown' Season 5 Be on Netflix?
'The Undoing' Season 2: Everything We Know
Advertisement - Continue Reading Below
Cute Gift Ideas for Every Woman in Your Life
'The Undoing' Differs Sharply From the Book
'The Undoing' Is Packed With Stars
Differences Between 'The Undoing' Book and Novel
It's Been a Weird Year for 'The Bachelorette'
Did Princess Diana Really Dance to 'Uptown Girl'?
'Bachelorette' Frontrunner Brendan Is an Actor
Everything We Know About Matt James