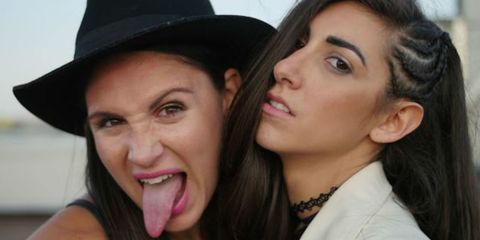 Courtesy of People of New York

In her new mockumentary Web series People of New York, comedian Jessie Komitor plays five different characters, Summer Heights High style. There's Joey, a boy from the Bronx whose favorite activity, unbeknownst to his friends, is spending hours on end at the nearby dog park, and Lauryn, an Upper West Side socialite with a high-end jewelry line…made of Froot Loops—plus three other big-personality characters. Each episode is only a few minutes long, but Komitor (who created the show in addition to starring in it) builds on her characters' circumstances to create a succinct narrative arc for each of them.

Though she's satirizing Humans of New York, Komitor says she loves Brandon Stanton's popular project. "I think it's beautiful," she says. "Every time you refresh it, you hold your heart and you're like, Oh." The idea is to take a handful of New Yorkers and make them come to life beyond a still image. "I feel like the portraits of People of New York are a version of following HONY a little deeper, seeing what the people are really like."

Komitor chatted with Marie Claire about the challenges of developing her own show, the process of accessing her characters' vulnerabilities, and, of course, the joy of spending time at dog parks.

Marie Claire: How did you come up with the idea for People of New York?

Jessie Komitor: I had an audition where I had to play seven different characters, all in one night, which is something I've never done before. And I ended up stumbling on Joey while doing that and from there, kept going. I love Joey so much, so that's what birthed the idea. I'm from New York, I went to school in New York, I live in New York. I've seen a plethora of characters walking down the street, and it's just ripe for satire.

MC: What was developing your own Web series like?

JK: It was a lot of work. I'm a huge advocate for creating your own work, but it's tough. I really buckled down, and I was fortunate to have worked with incredible people. The biggest challenge was I write something and then it takes me a long time to be okay with what I wrote. I'm a perfectionist, so allowing myself to be happy with it and comfortable with putting it on camera is really hard. But I really am so happy with how it came out. And the other thing is, we're doing it guerrilla style, so the first episode is our first stab at it, with no experience working together. Just kind of seeing what we can get and going out there and trying it for the first time. That's always hard.

MC: I loved that episode, because doesn't everyone love going to the dog park and stalking the dogs like Joey does?

JK: I mean, I'm that guy. I wish I could tell you I'm not, but I do that too much. I do that an uncomfortable amount. I go to the dog park, I watch other people's dogs, I recognize the dogs. I creepily stalk some of them on Instagram. It's not a good look, but we all do it. I think that's what I'm moving toward too. I'm hoping there are parts of myself in all these characters.

MC: How did you come up with each of them?

JK: Joey was definitely very close to myself, except on top of that, I added a layer of "What if it wasn't necessarily as socially acceptable?" So I gave him a group of friends who maybe wouldn't think it's so cool. Lauren was created because I see that person too much. It's terrifying, but I'm sure what Lauren really wants is for her dad to call her and be like, "I'm really proud of you."

MC: The thing that strikes me is how the comedy comes from the characters' vulnerabilities, but you're trying to be compassionate towards all of them.

JK: That's exactly my goal. I hope people can watch it and be able to see the comedy in laughing at themselves for feeling vulnerable, or for insecurities, and relating that way.

Courtesy of People of New York

MC: Some of the funniest and most revealing moments come from the details of what the characters wear, like the image of Lauren walking down the street in that giant fur that engulfs her. What's the styling process like?

JK: I mean, I write everyone's story, and I kind of embody them and then I write what they would say: quotes and plot points on what they'd have to say to move the story forward. But once I get on set, you start to feel the burden of how they put themselves together. Joey was so comfortable in that big puffer vest, comfy sweats, and my sneakers. I could do anything. You find that joy, versus with Lauren, I don't know how she doesn't cab everywhere. I loved putting on her makeup. And when I put on Nancy's [the Jewish mom's] wig, I'm no longer Jessie. My body changes, my mannerisms change. It's just so fun putting these things on.