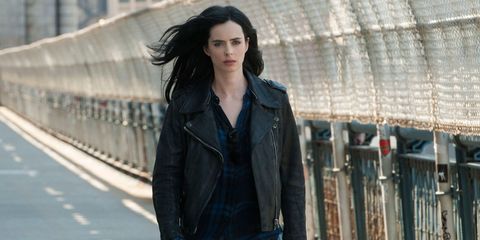 Ever wonder how Netflix figures out what to show you on its homepage? Like most major websites, it's the combination of several complicated algorithms. But Tech Insider reports that the site has decided to let users around the world help show you what to watch.

Up until December, your recommendations were limited by where you live. So the movies that popped up on your page were ones that were popular only in your home country. But now that Netflix is available in more than 190 countries, the company is currently factoring in the global response to a TV show or movie when it figures out what to recommend. "Intuitively, this makes sense," Netflix engineers wrote in an announcement. "If a member likes sci-fi movies, someone on the other side of the world who also likes sci-fi would be a better source for recommendations than their next-door neighbor who likes food documentaries."

This might seem like a small tweak, but it's actually huge—especially if you have really specific taste, or can't get enough of foreign films and TV shows. A good example of this is Japanese anime movies. They're huge in Japan, but have a smaller audience in the United States. But if you can't get enough Attack on Titan and you live in the States, similar titles will now pop up on your home page—even if they're big in Japan and nobody talks about them in the United States.

The move also helps users in countries that either have small populations or just got Netflix. After all, it's tough to get good recommendations when there aren't very many users in your country. "Great stories transcend borders, and that viewers around the world have more in common than they may realize," Carlos Gomez-Uribe, Netflix's vice president of product innovation, wrote in a company blog post. "Now our members benefit from like-minded viewers no matter where they are in the world."

This content is created and maintained by a third party, and imported onto this page to help users provide their email addresses. You may be able to find more information about this and similar content at piano.io
Advertisement - Continue Reading Below
More From New On Netflix 2021: What To Watch Now
The Most Heartbreaking Films on Netflix
Classic Movies You Can Stream on Netflix
Advertisement - Continue Reading Below
The Locations in 'Who Killed Sara?' Are Gorgeous
Get in the Spirit By Streaming a Holiday Movie
What Happened to the 'Chicago 7' After the Trial?
The Scariest Movies on Netflix
Fans Are Clamoring for a Second Season of 'Away'
The Best Halloween Movies on Netflix
Meet Your New Favorite Dating Show
The Best Romantic Movies for Every Vibe