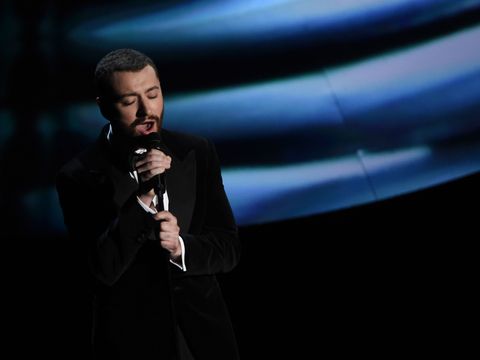 It still remains to be seen whether Sam Smith will get one award closer to an EGOT, but if his Oscars performance was any indication, he'll at least get there someday. The Brit is nominated for Best Original Song for "The Writing's on the Wall," the theme for Spectre, and performed the song in very Bond style. He rocked a great suit and performed inside what looks like a typical James Bond credit sequence, with lots of dramatic, black-and-white lights.

Unfortunately for Smith, his great performance was sandwiched with a bunch of weird jokes. Presenter Sarah Silverman launched into a monologue about how James Bond is likely bad in bed, and that Smith, "by no fault of his own," recorded the series' most recent theme song. "My favorite song is 'Father Figure,'" host Chris Rock joked after his performance, which seems like it was a reference to George Michael, another gay British singer. But come on! "Father Figure" is a jam, and in my mind, that was a compliment.

It all landed a little awkwardly and it's a shame—so let's just let his stellar performance speak for itself.