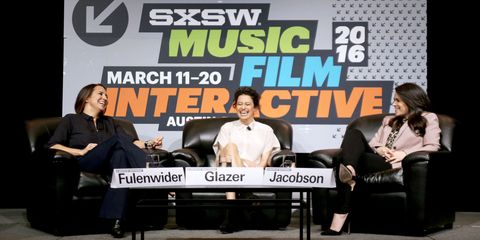 Over the weekend at SXSW, Marie Claire's editor in chief Anne Fulenwider sat down with Abbi Jacobson and Ilana Glazer for a candid, hour-log chat about the cultural phenom that is Broad City.

Watch the entire live stream and see our highlights below:

On being tied to the term millennial:

Ilana: "The target demo is so exciting—people in their twenties and thirties loving the show—but when people are older than that and love the show there's a particular sense of accomplishment there. I guess we don't feel like millennials. Or we do when we're scrolling through our phones and that's millennial I guess, but everyone is now. It's fluid."

Abbi: "The internet is kind of making everyone a millennial."

On being feminist icons:

Ilana: "Because we are feminists, everything that we do smells like it. That's the best, I'm stoked."

On creating their characters:

"The characters are inspired by us, truly us, and then we blow it out to absurdity for comedy's sake. But we don't put anything into the show that we don't believe in. We have the privilege of living this liberal life. It's fun to show how liberal it can be."

On having Hillary Clinton as a guest star:

Ilana: "Until she was filming it, it was really hard to believe. I would've understood if she couldn't do it. Like, yeah, you're running for president."

On the truth behind that Hillary Clinton texting meme:

Ilana: "You know that meme of Hillary texting? It's always us, every time."

"You know that meme of @HillaryClinton texting? It's us. Every time." - @ilazer#MCxSXSW pic.twitter.com/BCyrIoufBj

On not trying to make a political statement:

Abbi: "We wrote season three a year ago, at this point. That's not our show really: 'Let's make a political stance here.' It was really more that this is something Ilana's character would do. Hillary, even regardless of where we stand–and we love Hillary–is such an iconic figure. These girls being around her is not an everyday thing. It's how we feel being around her: 'Wow, this is a different world.'"

Ilana: "Because she's this icon, we're trying to make really good TV. I think you'll agree it's just a good episode of TV because Hillary Clinton is in it."

On the show's costume design:

On how often they *really* smoke weed:

Ilana: "I smoke a lot. I probably smoke everyday—smoke or vape. I'm very productive. But I don't do it to work. It's nice way to be like, 'I'm unwinding now.'"

Abbi: "I don't smoke as often as Ilana does. I was at my peak smoking in high school. I smoke, but I don't smoke a lot. I find that it makes me less productive. If I smoke it's like, 'Let's hang out!'"

On the last three things on their credit card statement:

Abbi: "A coffee around the corner, a humidifier because I'm afraid to go into Bed, Bath, & Beyond now, so I ordered it online, and a ton of markers. I splurged. It was disgusting. Like three hundred bucks of markers. You've got to spend money, to make money."

Ilana: "I bought this for you guys [points to the white blouse she's wearing], rubber ice cube trays on Amazon, and nut bars at the airport."

On how they made their first dollar:

FYI: @abbijacobson made her first dollar selling football pencils 🏈✏️ while @Ilazer was a waitress 🍔🍟#MCxSXSW

Abbi: "I don't understand how I got into this game, but I used to work at the school store and I bought all these football pencils. My mom is an artist and she set up this stand at the Garden State Race track, which is in Jersey. I set up next to her amazing pottery and sold football pencils. I was cute, so people were like, 'I'll buy a pencil.' [Laughs]'

Ilana: "I don't really know what I did as a kid, but my first real job was I started waitressing at 14."

On the one thing every woman should try once: