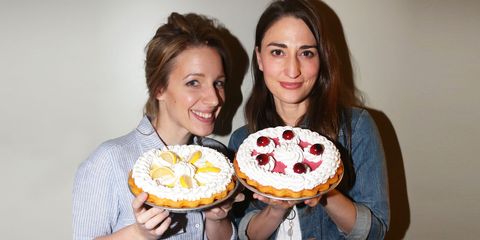 The razzle-dazzle sequin costumes, jazz hands, and cheesy grins that you're used to seeing on the Great White Way is *so* yesterday. Waitress the Musical, adapted from the 2007 film, ditches the tired "damsel in distress" narrative and provides women (and all people) with a fresh, relatable story, set to contemporary, soulful music.

What separates Waitress from any other musical is the imperfection it captures. It's a universal story about real characters, going through real life sh*t.  The musical revolves around Jenna Hunterson, a small-town diner waitress, faced with the decision of sticking with her miserable marriage, raising a child with a man whom she does not love, and serving to get by, or forging her own path by raising a child alone and embracing her dream of opening up her own pie shop.  There's really no riding off into the sunset with a knight in shining armor in this story.  "People can watch this and say, 'That's me. That's my friend. That's my sister. I know that person,' says director Diane Paulus.  'I feel for that character, because I understand it'...that's why people love this show."

"People can watch this and say, 'That's me. That's my friend. That's my sister. I know that person.'"

Grammy nominated singer-songwriter Sara Bareilles' score really helps all of the characters come to life, according to Paulus. "Her music just cuts right across that proscenium and enters your gut and your heart and your mind," Paulus says. Which, really, probably comes as no surprise. If you're a human being with a pulse, you need a moment after hearing any of her most popular, emotion-filled hits, like "Gravity," "Brave," and "I Choose You," (whether you admit it or not), and can understand why Sara is such an integral part of this powerful creative team.

Tony Award-winning director Paulus is no stranger to making Broadway history happen—she cast Tony winner Patina Miller as the Leading Player in the 2013 revival of Pippin, the first woman to take on the iconic role—and Waitress is no exception when it comes to forging new paths for women in theater: it is the first Broadway musical to have six main creative roles fulfilled by females, including Paulus, composer and lyricist Bareilles, book writer Jessie Nelson, choreographer Lorin Latarro, music director Nadia DiGiallonardo, and costume designer Suttirat Lalarb. But the most important takeaway is not just that the creative team is made up of women.  These artists are at the top of their field, regardless of their gender.

Paulus discusses the influence of the visibility of female role models, not only in the realm of theater, but simply normalizing women in leadership roles in general.  Seeing women creating incredible work is exactly what young women need in 2016 to realize their own potential. "What I'm happy about in terms of noting this historic moment," she says, "is that we can celebrate this, and shed a light on it, not so much to pat ourselves on the back at all, but just to send a signal to the next generation of young women."  Ultimately, Waitress is about one woman's quest for self-fulfillment, while behind the scenes, there are amazing women paving the way for other women's success. "Here we are," Paulus states, "it's the twenty-first century. We are here and you can be here too."

With a cast led by Tony winner Jessie Mueller, Waitress opens in Broadway previews March 25th at 8pm, and begins its official Broadway run on April 24th at the Brooks Atkinson Theater.

This content is created and maintained by a third party, and imported onto this page to help users provide their email addresses. You may be able to find more information about this and similar content at piano.io
Advertisement - Continue Reading Below
More From Culture
Pre-Order These Highly-Anticipated 2021 Books
The Best Shows to Stream on Every Platform
Advertisement - Continue Reading Below
A Look Back at Princess Anne's Life in Photos
Where Is the Cast of 'Gilmore Girls' Now?
Historical Films to Stream If You Loved 'Hamilton'
The Top-Grossing Book-to-Movie Adaptations
Meena Harris and 'Bridgerton' Collab for Merch
Will There Be a Season Two of 'Ginny & Georgia'?
We Need to Talk About the End of 'Behind Her Eyes'
People Have a Lot of Feelings About 'I Care a Lot'