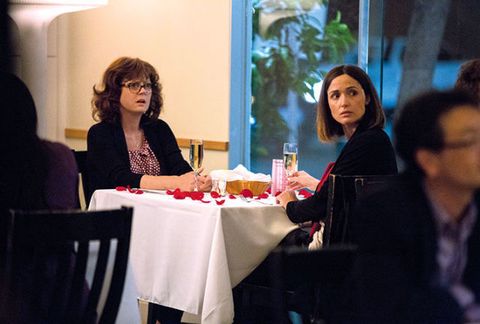 You're not a real person if you can't relate to that cringe-worthy moment when the last person on the planet that you want to see is the exact same person who casually strolls in to wherever you are at that moment. In this exclusive clip from the upcoming movie The Meddler, starring Academy Award winner Susan Sarandon as charming, optimistic busybody Marnie Minervini, and Rose Byrne as her daughter Lori, almost every single girl's Valentine's Day nightmare comes to life: running into an ex. With another girl.

Having recently gone through the loss of a husband, and a breakup, respectively, both mother and daughter, now living in the same city, make an effort to not wallow in self-pity on Valentine's Day by going out to a candlelit Galentine's dinner. Marnie has every intention to help by playing up their lonely girls' sleepover planned for later that night, but ends up digging her daughter's grave in front of her ex-boyfriend Jacob, played by Jason Ritter, and his new girlfriend Elise, who—sorry to bring up another Rose Byrne movie—seems like a total Helen from Bridesmaids, judging by her condescending smirk.

You might sink down in your seat a little while watching, not only because we've all been in Lori's position, but also because seeing the unrelenting love Marnie has for her resentful daughter might prompt you to call your own mother, or that relative you haven't spoken to in months.

Director and screenwriter Lorene Scafaria, whom you may remember for her film Nick and Nora's Infinite Playlist back in 2008, based The Meddler on her real-life experience with her own meddling Italian mother, who also moved across the country to be close to her after Scafaria's father passed away. Scafaria pushed for Marnie's deeply personal story to be made into a film despite naysayers who thought the characters were better suited for television. "Marnie should have a cinematic life. Characters her age on film are so often disrespected and laughed at. Marnie isn't someone who has done much with her life except be there for her family, but there is something really important and compelling about what she goes through in the film," she says in a press conference.

Though the plot is centered around strong women and their trials to achieve independence and self-fulfillment, Scafaria insists that this is more than just a "woman's story". "I was just trying to write people who are part of the human condition," she says. She urges us to connect with this heartwarming story by putting family first, regardless of how dysfunctional, and remembering that everyone moves on from life's most trying moments in different ways.

Don't miss The Meddler, in theaters in New York and LA on April 22. Watch the full trailer here, and don't forget to #CallYourMother.