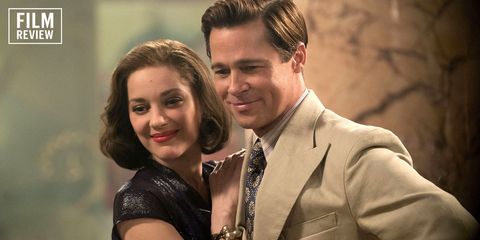 It's hard to go wrong with a completely gorgeous period film starring Brad Pitt and Marion Cotillard, and Allied meets expectations: It's pretty, engaging, and thrilling. The film's one flaw? Its audience. Allied deserves to be enjoyed without the burden of Pitt's personal life; it's a visually stunning movie carried by two of the most talented actors of our time. But can it rise above the gossip that surrounds it?

Allied will likely do well at the box office, in part because it tells a highly watchable story of World War II era spies who fall in love during a covert operation, only to have their perfect relationship put to the test thanks to a majorly juicy spoiler. It might also do well thanks to being made during the unraveling of Brad Pitt and Angelina Jolie's marriage—not to mention the fact that rumors of an on-screen affair briefly plagued Pitt and Cotillard. (So much so that she had to make a statement to remind everyone that yep, she's still happily married to her husband, and by the way they're expecting a baby.)

That said, by the time Pitt and Cotillard start shooting a bunch of Nazis mid-way through Allied, it's easy enough to forget their real-life drama and focus on the task at hand: watching a super-fun spy movie. Part of what makes Allied good is Pitt and Cotillard's on-screen chemistry, and while Pitt perhaps had stronger chemistry during his last spy film (ahem, Mr. and Mrs. Smith), he and Cotillard—particularly Cotillard—slay the sexually tense spy game. Pitt is the very definition of brooding, and Cotillard oozes "badass seductress who doesn't need a man but might as well have one" vibes. Observe this moment of dialogue: "The mistake people make in these situations isn't f*cking, it's feeling," she says. Their characters even have sex in the middle of a sandstorm, which might be the most gorgeous moment in the entire movie.

But chemistry and sandy love-making aside, Allied is bolstered by the blockbuster appeal Academy Award-winning director Robert Zemeckis is known for (it'll be a crime if the beautiful costumes don't get nominated for something). And sure, it might be a reach to read into Allied as more than a fun big-budget thriller, but the film attempted to subvert a few female domesticity stereotypes when Cotillard and Pitt's characters eventually settled down, which I, for one, appreciated.

There isn't too much to unpack here, but Allied certainly has enough romance, chemistry, and plot twists to make you think—once you get past Brangelina, that is.