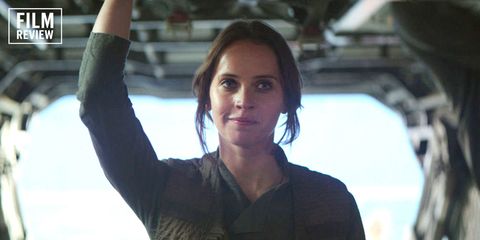 Okay, so Rogue One: A Star Wars Story isn't exactly your average Star Wars movie. There's no triumphant lightsaber battle. There's no Chewbacca. There's no existential crisis about "the force." There isn't even a John Williams-scored opening crawl with background on what going on in a galaxy far, far away.

But that's fine. There's still plenty of Star Wars-y Star Wars-ness to go around, including cool aliens, ordinary people doing extraordinary things, and insane outer space battle scenes. Plus, about four major OMG-YOU-GUYS cameos that made everyone at the press screening clap. Because it was f*cking awesome.

Rogue One is an explosive, nail-biting, thrilling, heartbreaking war movie that'll make you forget about the bucket of popcorn on your lap—and it features a strong cast that's as refreshingly diverse as it is talented.

The standalone spinoff tells the scene-setting story described in the opening crawl of the OG Star Wars: A New Hope: "…During the battle, Rebel spies managed to steal secret plans to the Empire's ultimate weapon, the DEATH STAR, an armored space station with enough power to destroy an entire planet…"

It all begins on the kind of cozy Sunday we all love—unless you're Galen Erso (Mads Mikkelsen), a former Imperial scientist who gets a visit from Director Orson Krennic (Ben Mendelsohn) and his totally on-trend white cape. [Side] Things don't, uh, go particularly well because Galen's young daughter Jyn Erso is left completely alone while he's whisked away to do some important work for Darth Vader's gang. Eventually she's found and taken in by rebel leader Saw Gerrera (Forest Whitaker), and moments later we flash-forward to meet twenty-something Jyn, played by Felicity Jones.

Jyn is a bad ass. We know this because even when rebel soldiers rescue her en route to an Imperial prison camp, she still beats the crap out of everyone around her. That is, until the arrival of my fantasy BFF K-2SO, a sassy seven foot droid voiced by Alan Tudyk who specializes in #realtalk, and provides levity to some serious bleakness throughout the film. Deadpan: "Congratulations. You are being rescued. Do not resist."

Turns out the rebels need Jyn to help find her old buddy Saw, and they offer her freedom in exchange. Why not? After some epic fighting, the gang finds Saw and realizes the Death Star is exactly what it sounds like: creepy and terrible. The good news? It has a teeny tiny vulnerability that Luke Skywalker will use to destroy it one movie from now.

"This is when Jyn becomes her peak feminist hero best."

Unfortunately Rebel Alliance in-fighting ruins the idea of hijacking the Death Star's plans, which is when Jyn becomes her peak feminist hero best. And, let's face it, we need her now more than ever. (See: the news.)

Jyn delivers a battle cry for action, for change, for not sitting this one out because you're scared. She's an action hero, yes, but a reluctant one. That is, until she witnesses the havoc that evil and unchecked power can wreak, and finally does something about it. She rejects fear. She risks it all for the greater good—not just because she's lost everything, but because it's right. So right that there's no other choice. And her actions inspire those around her.

Oh, and did we mention Jyn doesn't need saving? At one point she's surrounded by stormtroopers and singlehandedly takes them out one-by-one. She isn't tough "for a girl." She's strong, courageous, and relentless because she chooses to be.

Jyn, like any Star Wars hero, is a reminder that the bad guys with big resources and black helmets don't have to win. We won't tell you what happens next or how Rogue One ends, but see it. Then get to work.

Rogue One: A Star Wars Story opens in theaters December 16.

Jen Ortiz Deputy Editor, Cosmopolitan As deputy editor, Jen oversees Cosmopolitan's daily digital editorial operations, editing and writing features, essays, news, and other content, in addition to editing the magazine's cover stories, astrology pages, and more.
This content is created and maintained by a third party, and imported onto this page to help users provide their email addresses. You may be able to find more information about this and similar content at piano.io
Advertisement - Continue Reading Below
More From Culture
Will There Be a Season 2 of 'The Queen's Gambit'?
Who Is Zach J. on 'The Bachelorette'?
Advertisement - Continue Reading Below
A Classic Horror Bucket List for Scary Movie Buffs
'The Queen's Gambit': All About Those Green Pills
This Is the New 'Bachelorette' Villain
Dale Moss Is a Super Important 'Bachelorette' Star
It's Been a Weird Year for 'The Bachelorette'
50 Sexiest Movies of All Time
'The Queen’s Gambit': The True Story, Explained
Thoughtful Gift Ideas for the Work Wives You Miss