There are pretty much only two reasons you'd keep a webpage open after you've read it: You would like to remember the information it contains but don't trust your brain to do it. Or this.

there is a tab i am fearful to close.

That kind of Boy Scout-y premonition is how you end up with seven browser windows, 394 tabs so squished together you can only see half the logos, and a laptop that "sounds like a spaceship that's about to take off," to paraphrase our social media editor. But what does it all mean, other than that it would be in your best interest to leave the area immediately or at least back away far enough that you're shielded by your least agreeable coworker's body? Below, seven semi-troubling diagnoses.

This used to be cute in a "haha, Barnaby, you old bat" sort of way, it has gotten a bit tired as a comedy crutch. (Which reminds me: Why am I even doing this?) But we can be more forgiving IRL, where such a perma-tab might indicate that you caught the House marathon last night or that you are a real hypochondriac. IDK!

2. A Massively Expensive Pair of Shoes or Earrings That Are Objectively Ugly but Somehow Make the Cavity Where Your Heart Should Be Tingle

You are perhaps overly optimistic, but we have faith in you.

Turtles and textures in the #GucciGarden with the plush Princetown slippers featuring embroidered tigers. #GucciGift

You would pass a CAPTCHA with flying colors.

4. A Serious Music Publication's Playlist You Will Never Listen To

You are curious but not curious enough to sit through more than 30 seconds of the first song of each album like you're the Simon Cowell of Spotify. What can you say? You like what you like, which is Young Thug and the Little Mermaid soundtrack. (That Sebastian one is fire, man.) (Also, our EOY roundup is pretty solid.) 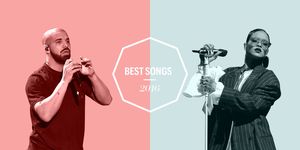 5. The New York Times Think Piece You Saw on Facebook, Read the Headline, Then Saved for "When You Have Time" (You Will Never Have Time)

So you just find a crucial-sounding bit from near the end and share it. That'll show 'em. By doing this, you reveal yourself as someone who cares what others think of you but not enough to actually read something someone else also pretended to read in hopes of impressing his or her peers. We're all f*cked up.

But, like, you're not sure if you want to give that account of pink interiors a follow and mess up your followers-following ratio? But trying to remember any name that's not @literallythenameofthething is so annoying? Conclusion: You are a waffler who is far too absorbed in the scheme of the superficial that is social media, which is actually a ploy to lull the population into ignoring the real issues while they participate in a twisted competition for false approval. Kidding! Love you. Mean it.

Well, you're just brilliant, aren't you? Thank you, Kevin, my dude.