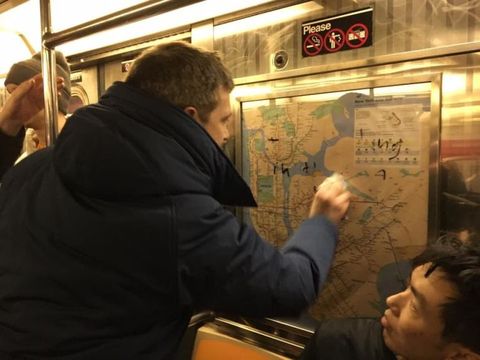 On Saturday night, a group of strangers boarded the 1 train in New York City to find it covered in Swastikas and other anti-Semitic vandalism, New York Magazine reports. One rider, Gregory Locke, took note of the scene and the mood on the train—uncomfortable silence, as you might expect. Then, something amazing happened.

"One guy got up and said, 'Hand sanitizer gets rid of Sharpie. We need alcohol.' He found some tissues and got to work," Locke wrote in a Facebook post along with pictures of the vandalism and cleanup effort. "I've never seen so many people simultaneously reach into their bags and pockets looking for tissues and Purel. Within about two minutes, all the Nazi symbolism was gone."

The story went viral and has already been shared more than 290,000 times in less than 24 hours. Even Chelsea Clinton was moved to share a screenshot.

We will not let hate win. And, another reason to carry hand sanitizer. pic.twitter.com/bgrAJf7SCv

"'I guess this is Trump's America,' said one passenger," Locke wrote. "No sir, it's not. Not tonight and not ever. Not as long as stubborn New Yorkers have anything to say about it."

Kayleigh Roberts Kayleigh Roberts is the weekend editor at Marie Claire, covering celebrity and entertainment news, from actual royals like Kate Middleton and Meghan Markle to Hollywood royalty, like Katie Holmes and Chrissy Teigen.
Advertisement - Continue Reading Below
More From Culture
The Best New Music of 2020 (So Far)
Listen Up: Gripping New True Crime Podcasts
Advertisement - Continue Reading Below
'The Bachelor' Has Already Finished His Season
Unmissable Horror Movies Coming Out This Year
Who Is 'Bachelor' Peter's Mom Talking About?
Sarah Coffin Might Be a 'Bachelor' Frontrunner
Who Is 'Bachelor' Contestant Victoria Fuller?
Meet the Star of 'The Bachelor's ChampagneGate
Jurnee Smollett-Bell Is a Real Life Superhero
The Best Love Songs to Ever Exist