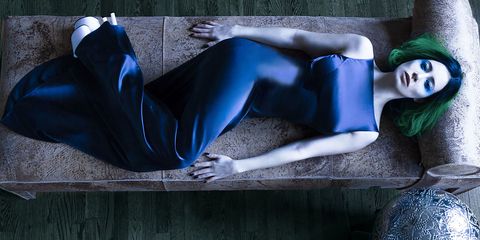 Everything's coming up mermaids these days. Hair. Makeup brushes. Sean Spicer in that he really wants to be part of your world but only if you sit quietly and don't ask any questions he deems inappropriate. But what about mermaid *music,* not counting that one time (last Saturday) you belted out "Under the Sea" as a power ballad?

Women with tails is the millennial-friendly category New York artist Stalking Gia is breaking into with her new song "Siren"—well, technically, the mermaid's deadlier cousin.

"I've always been fascinated by the mythology of sirens—devious creatures that resemble mermaids, but use their voices to enchant sailors and incite them to wreck," she said of the inspiration for the track, which she wrote alone by the sea in East Hampton. "The scene in Romeo + Juliet where they lock eyes through the fish tank visually inspired this song. We watched this on loop as we wrote. The first verse is an inquiry on attraction. What is unspoken when you lock eyes and are hypnotized by that moment?"

Rhetorically, no comment, but sonically, you get an iridescent, ethereal earworm undercut with the siren's plaintive, man-killing wail. "Don't you trust love?" she asks, when a bad romance could lure you into (figuratively) crashing against some rocks?

Check out the haunting photos throughout from the accompanying shoot, and give "Siren" a listen below.