Girls aired its series finale on HBO last night, and now the question on everyone's mind is obviously whether the show will pull a Sex and the City and make a follow-up movie. The answer? Sure, why not. But not yet.

"Of course we would!" executive producer Jenni Konner told Entertainment Weekly during a post-finale interview with Lena Dunham. "But that is as far as that rumor has gone. It's not like there are any conversations happening. I also think it would have to be a little while. We couldn't even do the finale without jumping in time a little. If we came back, there would have to be a good amount of time passed."

The series finale sees Hannah coming to terms with motherhood while Marnie finally realizes she needs to forge her own path, and didn't even include Jessa and Shoshanna—so there's definitely a few threads left to tie up. Plus, let's not forget about Twitter's obsession with an Elijah spin-off.

"We've gotten a lot of requests for it, that part is true," Dunham said, while Konner added, "That's a big Twitter request. We'd do it in a heartbeat because he's the most talented person on earth. But there are no plans for it. But please feel free to pitch it to HBO."

Either way, Konner and Dunham have a yet-to-be-revealed new project in the works that will keep them occupied for at least a while. "It's kind of perfect because it's the kind of comedy that we are known for and also taking a leap forward contentwise," Dunham said. "So we are pretty stoked." 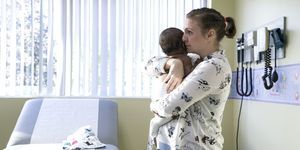 The \'Girls\' Finale Was Unsatisfying—and Perfect

Mehera Bonner Contributor Mehera Bonner is a news writer who focuses on celebrities and royals—follow her on Instagram.
This content is created and maintained by a third party, and imported onto this page to help users provide their email addresses. You may be able to find more information about this and similar content at piano.io
Advertisement - Continue Reading Below
More From Culture
Will There Be a Season 2 of 'The Queen's Gambit'?
Who Is Zach J. on 'The Bachelorette'?
Advertisement - Continue Reading Below
A Classic Horror Bucket List for Scary Movie Buffs
'The Queen's Gambit': All About Those Green Pills
This Is the New 'Bachelorette' Villain
Dale Moss Is a Super Important 'Bachelorette' Star
It's Been a Weird Year for 'The Bachelorette'
50 Sexiest Movies of All Time
'The Queen’s Gambit': The True Story, Explained
Thoughtful Gift Ideas for the Work Wives You Miss