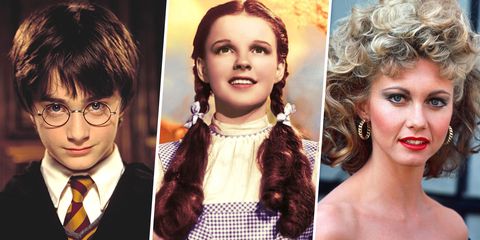 If you're in the mood to have your mind blown and/or have several of your favorite movies completely ruined for you, hello and welcome! Now, we all know the internet has a lot to offer in the way of fan fiction (most of which is horrifying), but there are some seriously impressive fan theories out there about your favorite films, some of which have been proven true. Like, did you know Dumbledore is the Grim Reaper? YOU DO NOW. First up....

'Aladdin' Is Set in a Post-Apocalyptic Universe

We know the Genie has been locked in his lamp for 10,000 years due to him popping out and being all, "Ten thousand years will give you such a crick in the neck!"

We also know he was out of his lamp during the third-century (read: the 200s), because he tells Aladdin that his fez and vest are "much too third-century." Doing the math, this would mean Aladdin is at the very least set in the 10000s—earliest. But other clues in the film point to the fact that it's actually set even farther into the future.

Genie also conjures modern-day appliances like cars and lamps, and does impressions of popular 1990s celebrities like Arnold Schwarzenegger and Jack Nicholson—which means Genie was out of the bottle during this era. Add 10k years to that, and Aladdin suddenly takes place in the late 11000s.

Since we know Aladdin takes place in the future, we can only assume the world has been destroyed by some kind of apocalyptic disaster that's turned it into a wasteland. 😊

Harry Potter Is the Reason the Dursleys Are Terrible People

As any die-hard Harry Potter fan knows, Horcruxes are fragments of Lord Voldemort's soul. We also know that exposure to Horcruxes can cause one to become very mean/bitter/moody/emo.

Proof: Ron turned into a *huge* jerk when he had to wear one of Lord Voldemort's Horcruxes around his neck.

We also know Harry himself IS one of Lord Voldemort's Horcruxes.

The Dursleys have been chilling with Harry since he was an infant. What if prolonged exposure to his inner Horcrux severely impacted their mental and emotional well-being? To quote the originator of this theory, "The fact that they survived such prolonged Horcrux exposure without delving into insanity or abandoning a helpless child only solidifies their place among the pantheon of noble and virtuous heroes in the Harry Potter universe."

Jack Dawson Was a Time Traveler

Jack has zero money at the start of Titanic, and had to gamble just to get a ticket. Is this because he had recently time traveled from the future? Probably not, but let's go with YES, DEFINITELY.

Jack also mentions he was fishing at Lake Wissota while trying to convince Rose not to jump into the ocean. Lake Wissota is a man-made lake created in 1917. Five years after Titanic sank.

Jack tells Rose he'll take her on a roller-coaster ride at the Santa Monica Pier, which wasn't built until 1916. Four years after the Titanic sank.

Grease ends with Sandy and Danny flying into the sky—but what if Sandy's actually going to heaven?

During "Summer Nights," Danny tells his buddies that he saved Sandy's life when "she nearly drowned." But what if she did drown? *mind explodes*

To quote this theorist, what if Sandy's entire story was a "vivid coma fantasy involving her summer fling with Danny, where they shared a magical year of high school together. The visions get increasingly outlandish as time passes, until finally, as Danny desperately tries to resuscitate her on the beach, she sees herself flying into heaven in her dying moments. The entire movie was a drowning woman's coma fantasy." ¯\_(ツ)_/¯

During Deathy Hallows, Harry is told a fairytale about three brothers who meet death (AKA The Tale of the Three Brothers). This macabre fellow gives them the Invisibility Cloak, the Resurrection Stone, and the Elder Wand. In this tale, Lord Voldemort is said to represent the Elder Wand holder, Snape represents the Stone holder, and Harry Potter represents the Invisibility Cloak holder. But what about Death? Fun fact: He's Dumbledore.

In real life, Dumbledore is indirectly responsible for both Snape and Voldemort's deaths. In the tale, the Elder Wand brother and the Resurrection Stone brother also die. *more mind explosions*

Dumbledore as death. It's a beautiful theory and it fits. https://t.co/QqTQm2QnI0

Dorothy Is the Wicked Witch of the East

So, we know that Oz has doppelgängers of Dorothy's friends in real life. Even she remarks (when waking up from her dream and seeing her family) that "you were there, and you were there." But weirdly, there's no doppelgänger for Dorothy herself.

You'll also remember that when Dorothy's house kills the Wicked Witch of the East, we don't see her face—but we do know that she and Dorothy have the same shoe size. Ergo, Dorothy is doppelgänger of the Wicked Witch herself.

'Tarzan' and 'Frozen' Exist in the Same World

We know Anna and Elsa's parents disappear while at sea in Frozen, but what if they didn't die? What if they were shipwrecked on an island and popped out Baby Tarzan?

This theory actually comes care of Frozen director Chris Buck, who told MTV News. "In my little head, Anna and Elsa's brother is Tarzan," he said. "But on the other side of that island are surfing penguins, to tie in a non-Disney movie, Surf's Up. That's my fun little world."