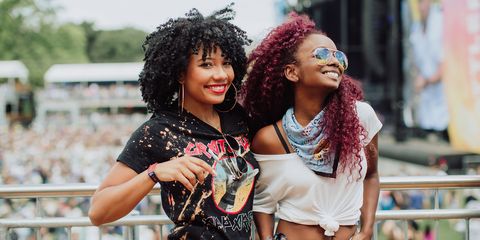 Not to be a hater, but the American Music Festival as an institution could be improved upon. (The hater said politely.) There could be better traffic flow so trying to thread your way between stages doesn't so closely resemble salmon swimming upstream to spawn (then to die). The toilets could flush 100 percent of the time. And more of the attendees would buy tickets and flights and hotel rooms and a different choker for each headliner...but actually enjoy the music too. 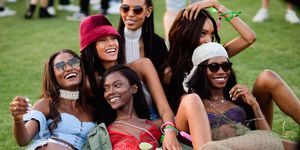 How to Make the Most Out of Coachella

But what if you didn't have to accept these things as the worst parts of an experience ultimately designed to leave guests with a sense of togetherness and lasting memories, and not just a bad taste in their mouths (that would be the dust)? What if that taste could be rosé, poured by a master sommelier as you head-banged along to the Foo Fighters amongst a few thousand strangers but not so many that you start wondering about a new plague?

It can be like that, and it was exactly like that at BottleRock Napa Valley, which concluded its fifth year Sunday.

As Alessandro Michele implied with a Freudian slip in a quote about his epic Resort 2018 show, Napa Valley has connotations of neo-Florentine wealth and power. And yes, at this three-day-long celebration of music, food, and wine, the crowd and attractions do skew older and wealthier and, I daresay, even whiter than average. This is not necessarily bad when it also means paella bars, the cleanest bathroom trailers this writer has ever had the relief of, uh, relieving herself in, and an Alaska Airlines-sponsored viewing deck that hosted regularly scheduled wine tastings adjacent to the main stage. (Ninety attendees also won free flights in a drawing there, which is alone enough reason to go.) But do expect to become well familiar with the phenomenon that is the retired bro, who will wind up fist-pumping on a couch at 9 p.m. before rallying at 9:32 p.m. to beat the traffic home.

Yet for all the dad rock and "we got a sitter for the weekend" woohoo-ism, there's still an earnestness that makes BottleRock chill and manageable enough for first-timers or those wary of bare backsides. Because of the particular demographics, one can practically walk right up to catch acts like Catfish and the Bottlemen that would draw a crush elsewhere. (Props, too, for booking indie artists, such as Day Wave and the delightful Hippo Campus, for the smaller stages.) Everything's pretty close together, so you don't have to trek 12 miles a day back and forth either. And they've got the kindest staff, an exception to the surliness you usually encounter on the circuit. But perhaps the best part of all is feeling just slightly like a fish out of water—but in the warmth and safety of a heated tank, with access to a whole shaker full of flakes. And buckets of Cabernet. 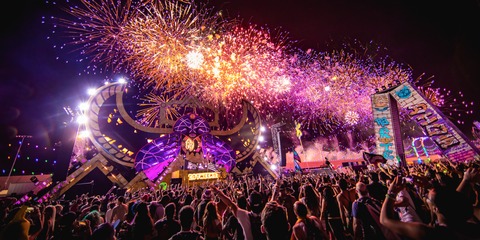 The Littest Moments from EDC 2017