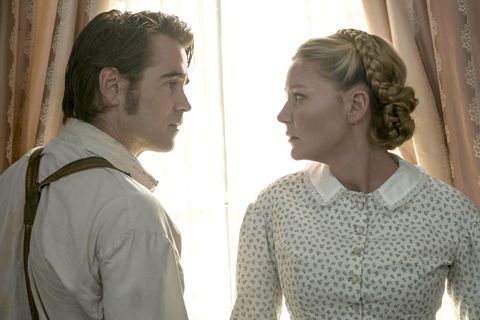 The Beguiled is inarguably one of 2017's most visually opulent films, and it's in large part thanks to costume designer Stacey Battat, whose creations are best described as evocative, etherial, and "oh my god, why don't I own this exact outfit"-inducing. In an exclusive interview with MarieClaire.com, Battat shares a sketch of Elle Fanning's loveliest dress from the film, recalls an on-set fashion crisis, and breaks down the *very intense* sex scene between Colin Farrell and Kirsten Dunst.

"The wrist bows are actually a Civil War-era detail. Elle's character was younger, so I thought maybe she didn't have jewelry for the dinner scene. But even when Nicole Kidman and Kirsten Dunst wore bracelets, they wore one on each wrist as well. It was super fun to design."

That Button-Popping Sex Scene Was Styled to a T

"We had to make multiple tops, which we'd loosen. There was one we used all the time, and there were two extras. We talked about how many times we'd cut Colin's pants, how many times we'd rip the shirt. We had prepared two shirts with the sleeve not quite sewn in so it was easy to rip—and same with the buttons‚ if you tugged on them they'd fall off. With Kirsten's bloomers, we did the same thing—they were loosely sewn together."

All That Sumptuous Lace? It Was Antique, and Hard AF to Find

"The lace is all antique, for the most part. I tried my best to use antique material, but it's very difficult. It's delicate, you have to take it out of other clothes. But there are places you can find it. There was a hardware store of all places in New Orleans that had dead stock. It wasn't from 1860, but it was similar quality."

And BTW, the Film Had a Big Fashion Crisis

"There was a really big fashion crisis moment. Someone put bleach in the washing machine and forgot, and then put clothes in the same machine. We had to remake things on the fly because the clothes were completely ruined. Stuff like that happens on all movies. It's very stressful at the time, now it just seems funny."