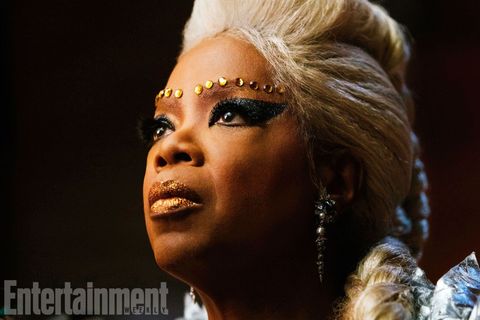 The first images from Disney's upcoming adaptation of A Wrinkle In Time are here, and we're already a little obsessed.

EW today released three photos of Oprah Winfrey, Mindy Kaling, and Reese Witherspoon in the adaptation of Madeleine L'Engle's beloved 1962 novel of the same name. After checking out the preview below, you're gonna want to click through to see the full gallery.

Directed by noted genius Ava DuVernay, and written by Frozen writer-director Jennifer Lee, A Wrinkle In Time is basically bulletproof. The story centers on a young girl, Meg, and follows her on a dimension-hopping adventure to find her father, a scientist who works for the government who has mysteriously gone missing. Thirteen-year-old Storm Reid plays Meg, while Winfrey, Witherspoon, and Kaling play a trio of mystical guides—as DuVernay put it to EW, "three Mrs. Doubtfires"—who aid her on her quest.

"My whole process with this film was, what if? With these women, I wondered, could we make them women of different ages, body types, races?" DuVernay continued. "Could we bring in culture, bring in history in their costumes? And in the women themselves, could we just reflect a fuller breadth of femininity?"

Emma Dibdin Contributor Emma Dibdin writes about television, movies, and podcasts, with coverage including opinion essays, news posts, episodic reviews and in-depth interviews with creatives.
This content is created and maintained by a third party, and imported onto this page to help users provide their email addresses. You may be able to find more information about this and similar content at piano.io
Advertisement - Continue Reading Below
More From Culture
Will There Be a Season 3 of 'Virgin River'?
What We Know About Part 2 of 'Lupin'
Advertisement - Continue Reading Below
'The Bachelor' Is Back!
Who Is "Queen" Victoria on 'The Bachelor'?
A Guide to the Fairies of 'Fate: The Winx Saga'
'You' Season 3 Is Adding a Menacing Character
'Fate: The Winx Saga' Season 2: Everything We Know
Who Is Michelle Young on 'The Bachelor'?
Who Is the Voice on the Radio in 'WandaVision'?
Everything We Know About Matt James