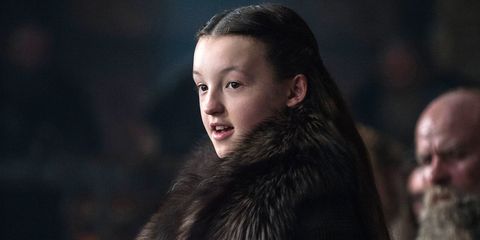 Game of Thrones has finally returned and, yes, it was definitely worth the wait. The Season 6 finale left us primed for a women-centric seventh season and the show didn't disappoint. Tonight's episode was the show's most feminist yet, from every single front.

Arya took out an entire house at a dinner party.

Arya finished Season 6 by taking out Walder Frey, the man behind the Red Wedding (where her mother and brother, Robb, were murdered). Season 7 opens with Arya disguised as Frey (thanks to the identity-stealing abilities she picked up with the Faceless Men), literally taking out his entire house. Arya-as-Frey explains that she's gathered every Frey who's worth anything for a feast to discuss the future of the family.

That future is...brief. Arya-as-Frey leads them in a toast with poisoned wine (but pointedly doesn't allow Frey's wife to drink), taking out every Frey "worth anything" in a single move.

This is huge for Arya, who has spent the last five seasons driven by a need to avenge her family. She traveled to Bravos to learn the ways of the Faceless Men, and even though it was pretty obvious that wasn't going to work out, she picked up some invaluable skills along the way. Arya is taking a stand for House Stark and not waiting for permission from her "half-brother" Jon or her older sister, Sansa, to do what she believes is right.

Season 6 ended with Jon Snow being declared King of the North—and Sansa not looking 100 percent thrilled to see her brother take her place as the leader of Winterfell. This season, she's already standing up to his rule by challenging him in public and refusing to back down, even when Jon presses her about the confrontation privately. She's unapologetic, and Unapologetic Sansa might be the best (and most interesting) Sansa we've seen yet.

Arya and Sansa's feminist stands are significant within the world of Game of Thrones, but Lyanna Mormont gave a rousing speech that was just a direct call for equality. When Jon announces that women and girls will be learning to fight for the war against the White Walkers, he's met with shock and disgust from some of the men of the North, who can't fathom their granddaughters going into battle.

And Lyanna is having none of it. In typical Lyanna fashion, she stands up to the room full of grown men and puts everyone in their place, reminding them that she's as much a Northerner as they are, and that women and girls can fight, too.

I don't plan on knitting by the fire while men fight for me. I might be small, Lord Glover, and I might be a girl, but I am every bit as much a Northerner as you. And I don't need your permission to defend the North. We'll begin training every man, woman, boy, and girl on Bear Island.

Cersei considers herself the Queen of the Seven Kingdoms. Jaime argues that she's Queen of three of them, tops, but does that faze Cersei? Not for a millisecond. When we meet her, she's having someone paint a giant map of Westeros on the ground so she can plot big picture strategy, she's focused on the task at hand (building a Lannister dynasty), and she's taking meetings with potential allies (Euron Greyjoy, who proposes marriage, is promptly shut down, and then leaves promising to bring her the greatest gift in the Seven Kingdoms to change her mind).

In other words, Cersei is doing the job. Love her, hate her, or love to hate her, Cersei was born to lead.

After years wandering around Essos, freeing slaves, gathering soldiers, and searching for ships, Daenerys took a monumental step in the premiere—onto Westerosi soil.

Dany and company arrived in Dragonstone, her family's ancestral home. For the record, this makes two women in the series who have personally put their families in position to rule the Seven Kingdoms.

Dany will face off against Cersei for the Iron Throne, making the final showdown a queen against a queen. The head of Daenerys' navy is a woman. The King of the North might be a man, but the true heir to the North is a woman and she's determined to make her voice heard. Oh, and her personal body guard, one of the most skilled warriors in the kingdom? That would be Brienne of Tarth—another woman. The fiercest House leader in the Seven Kingdoms is probably Lyanna Mormont, a young girl. The most skilled assassin in Westeros is probably Arya Stark, also a young girl.

Game of Thrones just delivered us an entire hour of medieval feminism and we definitely didn't hate it. Now, here's hoping the show takes Season 7 as an opportunity to correct its problematic use of sexual violence against women, too.

Kayleigh Roberts Kayleigh Roberts is the weekend editor at Marie Claire, covering celebrity and entertainment news, from actual royals like Kate Middleton and Meghan Markle to Hollywood royalty, like Katie Holmes and Chrissy Teigen.
Advertisement - Continue Reading Below
More From Culture
Who Will Be on 'Bachelor in Paradise' in 2020?
When Will 'The Bachelor' Women Tell All Air?
Advertisement - Continue Reading Below
'The Bachelor' Has Already Finished His Season
The 83 Very Best Rom-Coms of All Time, Ranked
An Investigation Into the Next 'Bachelorette'
The Best Korean Dramas to Get You Hooked
Who Is 'Bachelor' Contestant Victoria Fuller?
Everything to Know About Peter Weber's Ex
Read an Excerpt From the Uber Whistleblower's Book
The Must-Watch TV Shows of 2020