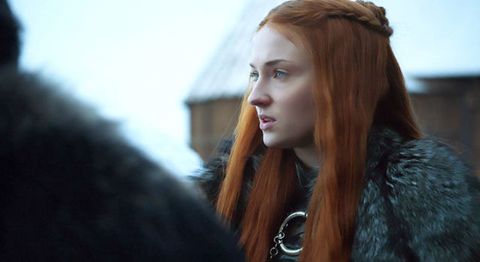 Game of Thrones' Season 7 premiere was full of feminist moments, as the women (and girls) of the series took center stage. But you probably missed one huge clue during Sansa's screen time.

The premiere was a big episode for Sansa: She publicly defied her "half-brother" Jon Snow and asserted herself as a force to be reckoned with. She also made it clear that she's wise to Littlefinger's plans, and engaged in a pointed exchange with Jon about Cersei—AKA Westeros' current HBIC.

"You're the military man, but I know her," Sansa said to Jon. "If you're her enemy, she'll never stop until she's destroyed you. Everyone who's ever crossed her she's found a way to murder."

Jon: "You almost sound as if you admire her."

Sansa: "I learned a great deal from her."

This is where some eagle-eyed fans, like those at Huffington Post, noticed that Sansa actually paid tribute to Cersei in a bigger way during the episode—by rocking her iconic, pre-Sparrow-head-shaving hairdo.

And we shouldn't just call this a coincidence. Sophie Turner, who plays Sansa, has commented on how the character's always-changing hairstyles are never random.

"Sansa's hair is constantly reflecting the people she's learning from, or mimicking, or inspired by at the time," she explained in an interview. "When she's Cersei's prisoner, and she's kind of absorbing all her manipulative techniques, it's reflected in her hairstyle, and when she's finding the spirit of Margaery in herself, she wears her hair like Margaery."

Some fans noticed the similarity right away on Twitter:

Is it me, or Sansa's hair looks just like Cersei's some seasons ago?#GameOfThrones

Others noticed it a while ago—just from the promotional material released ahead of the premiere:

Same hair as Cersei. Same look as Cersei. I think Sansa has learnt from the best.. #GOTs7 pic.twitter.com/9jeypzOVab

This is classic Game of Thrones foreshadowing and almost definitely means we can expect Sansa to deploy some of the scheming she learned during her time observing Cersei in King's Landing. The only question is: Does Jon Snow need to worry?

Kayleigh Roberts Kayleigh Roberts is the weekend editor at Marie Claire, covering celebrity and entertainment news, from actual royals like Kate Middleton and Meghan Markle to Hollywood royalty, like Katie Holmes and Chrissy Teigen.
Advertisement - Continue Reading Below
More From Culture
The Best Wedding Movies of All Time
Read 'Anna K' Even If You Didn't Read the Original
Advertisement - Continue Reading Below
19 Most Underrated Films of All Time
The Music Podcasts We Keep Pressing Play On
Why You Keep Seeing "Until Tomorrow" on Instagram
The 19 Best Murder Mystery Movies
How to Join Marie Claire's Online Book Club
'In Five Years' Is MC's April Book Club Pick
'Little Fires Everywhere' Is a '90s Time Capsule
How Murtagh Dies in the Outlander Books