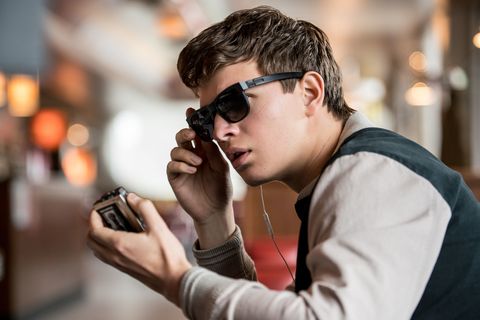 With Baby Driver, Edgar Wright has finally given us a truly original summer action movie—one that isn't an adaptation, or a remake, or a sequel, or part of a superhero franchise. And because Baby Driver is from Wright—director of Shaun of the Dead, Hot Fuzz, and Scott Pilgrim Vs. the World—it's filled with tiny Easter Eggs that elevate the film from a fun car chase romp to something intricate that lends itself to a second, third, and even fourth viewing.

I went in expecting some classic Wright foreshadowing and hidden secrets (remember how Ed's pep talk in the beginning of Shaun of the Dead basically walks through the entire plot?), but even after seeing Baby Driver twice, Wright informed me that I had missed some things. Here's what I got, along with commentary from the director himself. Don't read this if you're worried about spoilers, obviously, though to be fair none of it will make sense unless you've seen the movie.

1. The TV movie dialogue that Baby hears when he's channel surfing are lines he later repeats.

Alfalfa singing "You are so beautiful" becomes Baby's opening line at the diner. Baby uses "They grow up so freaking fast" (from modern cinematic classic It's Complicated) when he's talking to the bank teller. He parrots Fight Club's "How's that working out for you?" when looking at J.D.'s neck tattoo. He even uses the line from Monster's Inc, "You and I are a team. Nothing is more important than our friendship," when he's talking to Doc. And Doc calls him out on it.

Fans of Wright know he also directed the video for "Blue Song," which features Noel Fielding as a getaway driver jamming out to music while waiting for his gang to come back from a robbery. Consider it Wright's road test for Baby Driver half a decade earlier.

3. The footage of a bull fight on TV foreshadows Baby's final fight with Buddy.

"It says the matador must end this fight on foot—so Baby gets out of his car," Wright tells MarieClaire.com. Oh, and Buddy is also driving a Dodge Charger. Get it?

This isn't just a reference to the metaphorical bullfight at the end of the film, but also to the line Darling says in the diner: "You don't want to make my Buddy mad, because when he sees red, you will see nothing but black." As Wright points out: "He is bathed in red light for finale as he tries to kill Baby."

This Easter egg is twofold. First, Buddy Van Horn is a famous Hollywood stunt coordinator and director. And the name Jason is a callback to a joke during the bank heist when they accidentally got Austin Powers masks instead of masks of the killer Michael Myers. "Jason is who JD thinks is the 'killer dude from Halloween,'" Wright explains. "Buddy becomes like Jason."

6. While going over the plan, Baby talks about needing a car heavy enough to push a police cruiser if he has to.

Turns out he will—when he pushes Buddy's car off the parking level. The moment is additionally foreshadowed by Baby letting the toy car fall back off the table. Per Wright: "He also allows the blue Galant in the post office heist to smash into the dumpster and kill Bats."

7. The bank teller quotes a Dolly Parton lyric about needing to put up with the rain if you want the rainbow.

It's raining when Baby sees the teller before the final heist, and there's a rainbow when Baby gets out of prison.

Wright is British, that's why he puts the date before the month. The same number is visible painted on a wall during the Harlem Shuffle scene.

9. 'The Driver's' director Walter Hill has a cameo as the voice of the man translating for Joseph, Baby's foster father, in court.

Additionally, Wright says there's significance to Jon Spencer—the prison guard who says "you got a letter kid." Turns out '90s band The Jon Spencer Blues Explosion is responsible for the song about groovy bell bottoms in the opening scene.

They're in the background—on signs and in graffiti—while Baby is listening to the song on the way to and from the coffee shop.

11. There's a mural featuring a car on the wall of the diner behind Deborah, and it has significance.

Wright explains that it's the "same as postcard at the end, and the same as the car in the dream."

Next time Doc calls, Baby is on a date with Deborah, and he doesn't answer.

13. The beam that Baby rams into to kill Bats has a red rag tied around it—the color Bats primarily wears.

14. Baby Is NOT dressed like Han Solo on purpose.

The color-blocking on Baby's sweatshirt makes it look like he's matching a certain international smuggler with a certain iconic white shirt and black vest. But turns out this wasn't intentional. Wright says Baby's blacks, whites, and grays are meant to show his moral ambiguity, and his clothes darken as he's sucked deeper into the world of crime.

15. When Baby enters the coffee shop, there's graffiti on the wall behind him featuring a black heart....

When Deborah walks by it and we see the graffiti again, heart becomes red.

16. After Baby's apartment has been ransacked, you can see vinyl albums from the 'Baby Driver' soundtrack, like Queen and Blur.

Wright confirms: "You see all the albums featured in the movie—including Focus, Detroit Emeralds, Simon & Garfunkel, and more."

17. When Baby calls Doc from a pay phone, there are purposeful graffiti tentacles around him.

"Yes," Wright says. "Tentacle graffiti to show that they are not free of the grip of crime yet."