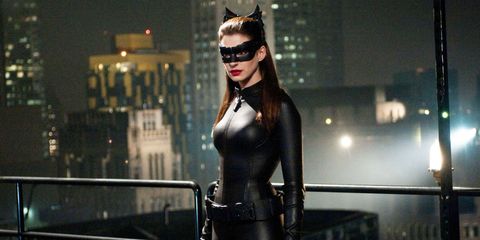 Minus literally everything Donald Trump has ever said, the past few years have arguably been great for feminism. And pop culture, at least for the most part, has responded by bringing us a new class of interesting, diverse female leads. But sexism isn't the Berlin Wall. You can't tear it down with sledgehammers and call it a day. Sexism can be sneaky. It can be subtle. It can creep into even the most awesome and well-meaning films. The superhero genre in particular is making great progress—uh, hello, Wonder Woman!—but we've still got a ways to go. Here are six examples of Hollywood getting it all wrong.

The Period Reference in 'Batman: The Killing Joke'

The Scene: For those not in the know, The Killing Joke is one of the seminal Batman stories, in which The Joker kidnaps Commissioner Gordon and paralyzes his daughter Barbara—AKA Batgirl. When the animated film hit theaters in July 2016, a thirty-minute prologue was added to the story. The prologue follows Batgirl on an average night of crime-fighting, and—as one of the criminals she's pursuing makes increasingly-sexist comments—culminates in a quip about how it must be "that time of the month." Batgirl then beats said criminal to near-death.

Why It's Sexist: There's nothing wrong with trying to give the only female character in your story a bit more agency, but it's clear that the filmmakers don't care about any real challenges Batgirl has as a female crime-fighter. They're just poorly attempting to pander to women in the audience by showing a "strong" female character punching men. This is a very old, very stupid definition of "girl power" that was just as gross twenty years ago as it is today.

The Scene: In Christopher Nolan's wicked awesome Dark Knight Trilogy, Catwoman is a slinky, sexy woman living in near-poverty with another female. She teams up with Bane to take down Batman, before realizing that—gasp!—Batman is that insufferable yet attractive billionaire she robbed, Bruce Wayne!

Why It's Sexist: Admittedly, there are a few things the Nolan brothers got right when writing Catwoman. In one scene, she pretends to be in hysterics to evade the police because she knows the cops will ignore an emotional woman. She's aware of the sexism around her and uses it to her advantage—and I like that. But at the end of the day, she's yet another female character fighting in ridiculous stilettos, contributing next-to-nothing to the plot, and filmed at angles that unnecessarily focus on her leather-clad butt. If you want to see a movie that balances Catwoman's complexity and sex appeal, go check out Tim Burton's Batman Returns.

The Hulk Saving Black Widow in 'Avengers: Age of Ultron'

The Scene: A lot of people take issue with the scene in which Black Widow tells The Hulk about her forced sterilization. But clumsy at it was, it was well-intentioned and expressed the complexity of Black Widow's emotions in that moment. The scene that really ruffled my feathers comes later in the film, when Black Widow is kidnapped out of nowhere, and quickly discovers a way to call for help so she can be rescued by her love interest, The Hulk.

Why It's Sexist: This cul-de-sac in the plot has no point—remove it and nothing in the story changes. The only reason it's there is because Black Widow's the only woman on the team, and we're used to seeing women saved by men. Add to this the unnecessary love story (plus the fact that her character does nothing to further the plot), and we're left with a completely different character than the Black Widow who kicked so much butt in The Avengers Assemble.

Starlord Saving Gamora in 'Guardians of the Galaxy'

The Scene: Gamora is the favorite daughter of Thanos, and one of the most intimidating beings in the Marvel universe. She's said to be a killing machine, and we even see some of her skills used while fighting Starlord. But then the gang gets arrested and sent to prison, and in the middle of the night, Starlord notices that some thugs have captured Gamora. He saves her life, and their witty banter/sexual chemistry begins in earnest.

Why It's Sexist: Let me say it again: Gamora is supposedly one of the most dangerous people in the galaxy. Why, then, is she suddenly unable to defend herself against some random space thugs? Because she's the one woman on the team, and so—by Hollywood logic—she has to be in a relationship with the main character, and therefore be weaker than him. The best way to get her to fall in love with Starlord and establish his strength? Have him save her, even if it makes no sense. In that one scene, Gamora goes from holding her own on the team (and contributing to the plot) to becoming 'the chick' of the group for the rest of the film.

The Scene: A significant portion of this film is devoted to Harley's backstory—how she was manipulated and seduced by her psychiatric patient The Joker. She has been his adoring and obedient henchwoman ever since.

Why It's Sexist: The Joker-Harley relationship has always been twisted and abusive, and that's why it's so heartbreaking and fascinating. In the comics, Harley's shown to have a lot of doubts about her relationship—leaving and returning again and again. It's a realistic if disturbing look at why women stay with horrible partners. However, in the film Harley isn't shown to have any doubts—she loves The Joker no matter what he does. And that's just gross.

The Scene: Mystique's been dealing with body-image issues since childhood (who can blame her, she's blue!), but her feelings of alienation come to a head when a boy she likes (AKA Beast) tells her that all unusual-looking mutants are ugly. She then falls into the arms of Magneto, who loves the way she looks. With this positive affirmation, Mystique's suddenly more sympathetic to Magneto's political views, and joins his extremist group.

Why It's Sexist: You're kidding, right???