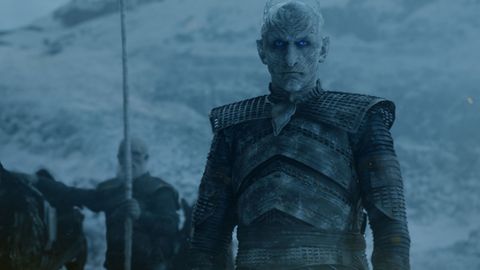 Okay, so we know Game of Thrones' The Night King wants nothing more than to kill dragons, be evil, and take over Westeros—but we still don't know what his ultimate goal is. But one Reddit theorist (who else?) has a pretty compelling theory about what this blue-eyed villain wants—and how it ties into the whole Bran Is the Night King drama.

The theory claims that The Night King is heading to God's Eye—the massive lake that holds The Isle of Faces. Why? Because the Isle of Faces is where the peace pact between the first men of Westeros and the Children of the Forest happened—and ever since then the Night King has been alive. If something about the region has magical immortality powers, that could obviously be a huge draw for the Night King:

Ultimately I think his end goal is to reach the Isles of Faces and use its magical properties to give life to his undead army. Eastwatch by the Sea is the closest part of the wall to the Gods Eye. Harrenhall is on the northern shore of the Gods Eye. The writers have dropped hints about the Gods Eye for years and have always discussed the Riverlands with great detail.

So basically, the Night King wants his undead army alive. But how does this relate to Bran? As you may or may not know, the internet is convinced he's secretly The Night King—which you can read about here:

But if Bran is The Night King, the desire to turn The Dead back into humans could be a master plan to bring peace back to Westeros:

Guess we'll have to wait until Season 8 to find out. Which, by the way, is completely unacceptable. 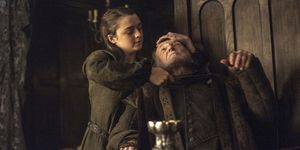 The Hidden Pattern in \'GOT\' Deaths