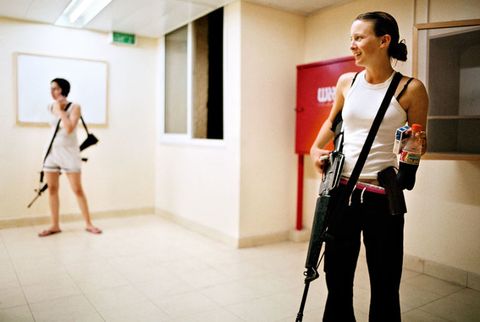 All Israelis are drafted out of high school for army service, starting with boot camp. What was the hardest part for you?

How tired I always was [laughs]. Maybe it's because I had lived a sort of privileged life, but I couldn't get used to sleeping just six hours broken up with 20 minutes of guard duty. And throughout the day you're very active, always on your feet. I've pulled all-nighters and stuff like that, but this was a different type of tiredness. The discipline was hard for me, too. I wasn't a very good soldier.

Did you ever get into trouble?

Everybody got into trouble. The worst was if you lost something like equipment. One girl lost a canteen, and they stood her in front of us and yelled and told her to imagine a hostile person finding the canteen and filling it up with explosives.

How strict is the army about makeup and clothing?

There are tons of rules, but what was really hard was how we had an hour each day for "personal time" when you had to shower, and there were five showers and 60 or so girls. Everyone had to carry around an M16 rifle at all times, even to the bathroom, so you had to get another girl to watch it while you showered. If you were in there for more than three minutes, people started yelling.

Did you ever feel that women were treated like second-class citizens?

By and large, in Israel, I don't think women are seen as second-class citizens — although in the army, girls tend to do administrative work or intelligence, things like that. There are female pilots, but it's not the norm. It's the first time your opportunities aren't the same. It's understandable but surprising.

Where were you assigned?

I trained soldiers how to shoot different weapons on a training base. I had guard duty, too, which was boring. We were based well inside Israel but a little bit close to the [Palestinian] territories, and really the biggest problem were kids from Arab towns stealing from the base. One time a few soldiers were practice shooting, and when they went to check their targets, they left their vests fully equipped with helmets and magazines and flashlights. When they got back, they saw their vests running up a hill. The thieves were ballsy. But most of the time on guard duty, you were just alone without your phone or a computer or TV. And you can only sit for 10 minutes for every 50 minutes. If you have to go to the bathroom, you just pee in the sand. Some of the guard posts were better than others and girls would fight over them. Most preferred being at the entrance of the base where you'd push a button to open and close the gate because you'd at least have people to talk to.

Did you ever fall asleep on duty?

People did. My thing was reading books. I got punished for it once. I lost my weekend vacation — and then figured the odds of me being caught again were small, especially if I propped the book a certain way.

The female characters in your book fool around and flirt with the male sol-diers. Was there a lot of sex going on?

It depended! Some girls had steady boyfriends from high school, but there were definitely people at the base who were dating, and everyone knew it. And there was a particular guy in my unit whom all the girls liked. But it's also perfectly normal to go through your entire army experience and not be involved with anyone. There's also a very strict separation of girls' corridors and guys' corridors. One time, we were taken out of boot camp to help with the Gaza pullout [in 2005, when the army forced Israeli settlers in the Gaza Strip and some West Bank settlements to resettle], and we were on a makeshift base — just a bunch of tents in this sandy place. There were tons of soldiers and then this stupid white string around the girls' sleeping tents. Someone would always check it, too, to make sure no one crossed it.

In the army, it may often be boring, but danger is always lurking. How did this affect you?

I think the main thing I learned was how to deal with boredom — how to entertain myself when I was alone or doing routine boring things. It also made me less afraid of things, because when you are promised danger or big consequences and at the end nothing happens, you become more indifferent.

This content is created and maintained by a third party, and imported onto this page to help users provide their email addresses. You may be able to find more information about this and similar content at piano.io
Advertisement - Continue Reading Below
More From Culture
Who's Who in Netflix's 'Emily in Paris'
The Privacy Whisperers
Advertisement - Continue Reading Below
Take Our Quiz to Find Out How Safe Your Info Is
The Best Serial Killer Movies Ever Made
What to Know About Tayshia's 'Bachelorette' Cast
Tara Palmeri on Hosting a Podcast for Survivors
It's Been a Weird Year for 'The Bachelorette'
Clare Crawley's 'Bachelorette' Cast Is Out
Honor RBG With These Books & Movies
Sad Movies for When You Need a Good Cry