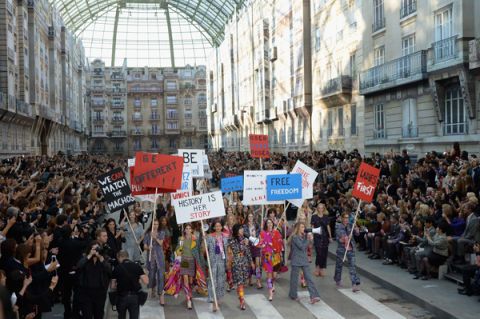 Has Karl Lagerfeld just become the ultimate He for She? At Chanel's Spring 2015 show during Paris Fashion Week, the Kaiser transformed the Grand Palais into a Parisian Boulevard and staged an impassioned feminist protest, sending his massive pack of models freedom fighters down the runway with picket signs during the finale. The scene was modeled after the May 1968 student protests in France, but riffed off of today's movement for gender equality, particularly through the lens of social media.

It was no surprise to see Cara Delevingne leading the charge shouting "What do we want?" into a megaphone, then "When do we want it? to subsequent cries of "NOW!" from her catwalk peers. A handful of the models' signs read as follows: "Feminism not masochism," "History is Her Story," "We Can Match the Machos," Ladies First," "Be Your Own Story," and "He For She." The latter being Alexa Chung's ode to Emma Watson's groundbreaking campaign.

Prior to the larger-than-life capper, Lagerfeld sent 85 looks on 85 different models down the runway. He described the collection as "clothes for life," and fittingly so with utterly wearable, slightly masculine suiting, cropped jackets, scalloped collar blouses, banner dresses, and fit and flare skirts. He foreshadowed the march by playing women's rally roars over the soundtrack, which closed with the instrumentals from Chaka Khan's sisterhood anthem 'I'm Every Woman.'

If this wasn't the fashion industry's feminist battle cry, we don't know what is.

#GIRLPOWER at #CHANEL! #KARLLAGERFELD #ZEITGEIST #MARIECLAIREMOMENT (And BTW the clothes were great too) #PFW @marieclairemag