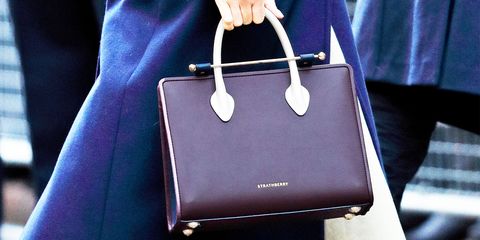 Meghan Markle has only gone outside twice (officially, as Prince Harry's betrothed), but she's already proven she's got the same pull as fellow style icons Kate Middleton and Prince "I'm Dropping Out" George. Empirical evidence of the Markle Effect: The businesslike Strathberry tote she carried to look appreciatively at people's cards sold out in 11 minutes.

If you, like a lot of royal watchers, were like "Strath-a-whatta?" on Friday, here's an introduction to the brand—before it becomes a household name.

Background Info You Don't Have to Look Up Yourself

Unlike the Firm into which Markle is marrying, Strathberry is comparatively young, having only been around since 2013. The Edinburgh-based house's goods—"defined by clean lines and the signature bar closure"—are produced in Spain, where it takes "up to 20 hours" to handcraft one bag. Paired with a Mackage coat, the whole look links her past (Canada, where she lived to film Suits) and future (the U.K., which, let's not forget, isn't just England).

That One's Sold Out, Probably Until Princess Charlotte Goes to College, so What Else Is Good There?

Plenty of stuff! How about this small pink guy that has a top handle and shoulder strap you can switch between, depending on how many other things you're holding securely in your hands?

Or this backpack, which is probably just as cute as the baby one Prince George carries when he made to go to the place he's already fed up with?

Or maybe this oversize tote that would be great for travel and/or smuggling out one of the Queen's corgis, who already like Meghan better than Harry?

Other Famous Friends of the Brand

With a coup as significant as a Markle-size placement, Strathberry has positioned itself to grow its celebrity headcount to Taylor Swift Squad numbers (pre-Balkanization). But even before that, the brand already has a none-too-shabby following, including Jamie Chung, Olivia Culpo, and Ellen DeGeneres and/or Portia de Rossi (it's kind of hard to tell).

TBT to The Championships, Wimbledon, where we were so happy to see @Portiaderossi carrying The Strathberry Midi Tote in Pearl Grey alongside Ellen. #TBT #Wimbledon #portiaderossi #ellendegeneres #luxury If the product you are looking for is not available, please click 'email me when available' to be notified as soon as it is restocked.