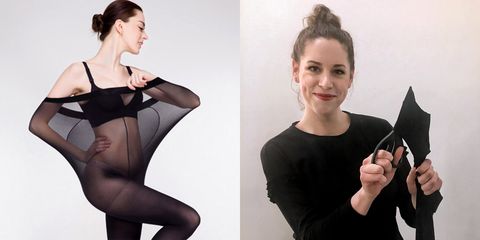 A few months ago, I made a bad decision. Or, okay, at the very least, a questionable decision. After a rousing night out with friends, during which some drinky drinks may have been consumed, I came home, spent my usual two hours scrolling through social media, and saw an ad that made my burry little brain go, “Oh, shit, okaaaay!”

The ad? A really sketchy, scammy-looking video of completely indestructible, rip-proof, tear-proof, apocalypse-proof tights. I’m talking two minutes of a woman unsuccessfully trying to poke a hole through these tights with a knife, before failing to slice them open with a box cutter, before sticking a pineapple in them and cutting through said pineapple with a cleaver—no harm to the tights whatsoever. I mean, can you imagine how that would look to a tipsy mind? Harry Potter–level magical.

Perfect for humans AND pterodactyls!
Courtesy of Brand

And so, against my better sober judgement, I bought them. I went to the sketchy site called Little Play Land (although I've seen them on a bunch of other sketchy sites, too, so who knows where they originated), which has a sketchy, clipart-looking logo, along with a sketchy, barely English product description: “Super Flexible Magical Stockings. This tights also super thin that you can compare it to how thin the cicada's wings are.”

But did any of that deter me? Hell, nah. Bought those suckers for the low, low price of $14.97. (Thankfully, the website did offer PayPal as a payment option, which means my identity and credit card info were probably not stolen). I then went to sleep and completely forgot about this purchase. But a cool seven weeks later, a pair of magical stockings arrived at my door, housed in a war-torn envelope covered in a billion foreign stamps.

I ripped open the packaging, half expecting the tights to dissolve into a pile of ash in my hands, but, surprisingly, the material—vaguely described as a “super elastic material” on the website (which, um, isn’t that just elastic?)—were ridiculously soft and hella sturdy. As my co-worker said when she felt them, “This is the kind of material you know will give you a yeast infection”—i.e. not breathable at all.

For all those times you accidentally cut yourself with a box cutter!
Courtesy of Brand

As for how they actually felt on my legs, I couldn’t tell you. The tights are supposedly one-size-fits-all, which didn't worry me initially, considering every photo depicts a woman splaying them around her body like a tent. Seeing as I am a woman, not a tent, I figured they'd fit fine.

But no—these tights were apparently made for a cartoon stick figure with lines instead of limbs. Though they could easily be stretched the length of my body (times two), the legs themselves could barely stretch out wide enough to accommodate my arm. Seriously—I managed to wriggle them up to my knees before the material became an impossible compression wrap, like one of those paper finger traps you had as a kid.

After trying to fit them over every part of my body and failing, I gave up and stuck a bunch of sharp shit in them, trying to see how quickly I could destroy them. Surprisingly, they were really resilient. I didn’t have a pineapple or a samurai sword or a box cutter or a cleaver, but I did have scissors and some rings. First, I scratched a line down the tights with the tip of my sharpest scissors. No rips or runs. I rubbed my sharpest, most annoying rings across the surface of them. No snags. I wrapped them around my body like a boa constrictor, stretched them from one side of the room to the other, and bit them. No rips at all.

I poked a hole through the tights five seconds after this video ended.

Then, I tried cutting them, like the photo on the website shows the model doing. And boom—they cut clean through, like any normal fabric. I also tried piercing and skewering my scissors through the tights, as evident in the photo at the start of this article, and, a second after the photo was taken, they tore through the tights, leaving behind a big hole. Granted, I don’t think this is a totally fair test, since I don’t imagine too many people will be attacked with scissors in their daily tights-wearing, but I’m nothing if not thorough.

Overall, I’d rate these tights a 10/10 for resilience, and a 0/10 for practicality, solely because they are not at all wearable by any adult human ever. And I realize that there are plenty of very tiny, skinny adult humans out there, but considering the fact that I couldn’t get these tights comfortably up my arm, I can’t in good faith recommend anyone buy them to wear on their legs. Of course, I may have just gotten a pair from bad, faulty batch, but I’m not about to spend another $15 to find out. At least, not until my next happy hour.

This content is imported from {embed-name}. You may be able to find the same content in another format, or you may be able to find more information, at their web site.
Don’t try this at home, because it doesn’t work at all.
Courtesy of Brand
Chloe Metzger Deputy Beauty Director Chloe Metzger is the deputy beauty director at Cosmopolitan, obsessively writing about new makeup launches, the best hair products (curly girl here; whattup), and the skincare formulas that really work for every skin type (follow her on Instagram to see behind-the-scenes pics of that magazine life).
This content is created and maintained by a third party, and imported onto this page to help users provide their email addresses. You may be able to find more information about this and similar content at piano.io
Advertisement - Continue Reading Below
More From Fashion
Leather Skirts Are an Edgy Wardrobe Must-Have
Back to Basics: How To Build a Minimalist Wardrobe
Advertisement - Continue Reading Below
Michelle Obama Stuns at Biden-Harris Inauguration
Jaclyn Rothenberg Pursues Pantsuits In Every Color
What to Buy From Madewell's Secret Stock Sale
What Biden's Family Wore on Inauguration Night
Your Girlfriend Will Approve of These Chic Gifts
The Softest, Coziest, Warmest Socks You Can Buy
Why Everyone Wore Monochrome to the Inauguration
See Kamala Harris's Sequin Inaugural Concert Look