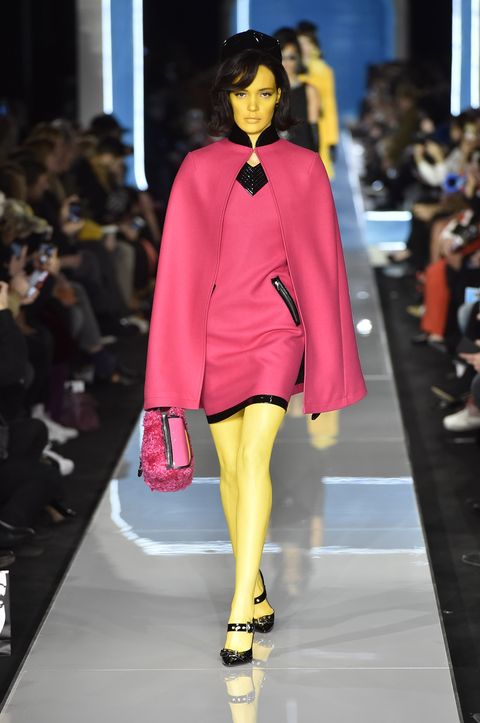 The new Moschino campaign, "Alien Nation," headed by creative director Jeremy Scott, is facing backlash for its brash portrayal of models as "aliens" as political commentary in regard to the Trump administration’s abhorred immigration policies.

Supermodels Gigi Hadid and Kaia Gerber are starring as “aliens” in the campaign. Yesterday, on each of their personal Instagram stories, the two models' faces, framed within a five-second selfie, sported the fiercely beautiful stares we are accustomed to. Also: Gigi was blue, and Kaia was orange.

In Instagram and Twitter posts advertising the collection—and the monochromatic bodies that pose in them—Scott asks: "What is an 'alien'?" Most bitterly received was Scott’s description of a Twitter photo of a blue-skinned, Moschino-clad Gigi Hadid: “The only thing illegal about this alien is how good she looks.”

One Twitter user responded, “Please reconsider this phrasing,” another with “Hey this caption ain’t cute.” Yet another deemed this campaign “actual xenophobia.”

In response to the backlash, Scott defended the political intent behind his ad campaign to a single commenter: “THE ENTIRE CONCEPT OF MY AD CAMPAIGN WAS TO BRING ATTENTION TO THE US ADMINISTRATION’S HARSH STANCE TOWARDS ‘ILLEGAL ALIENS.’ I PAINTED THE MODELS IN MY SHOW AND THIS CAMPAIGN AS A WAY TO BRING ATTENTION TO THIS AND DISCUSS WHAT EXACTLY IS AN 'ALIEN' ARE THEY ORANGE BLUE YELLOW GREEN? NO THEY ARE OUR FRIENDS, NEIGHBORS, CO WORKERS, RELATIVES AND PEOPLE WE LOVE.”

In Hadid’s Instagram story, the models' faces and necks were absolutely opaque, and their hands and forearms—which poked gracefully through the sleeves of Moschino jacket-sleeves in subsequent Instagram pictures—were equally vibrant. The look juxtaposes a polished, suit-wearing Jackie Kennedy aura with that of an otherworldly creature: Technicolor, whimsical, and utterly bizarre.

Yesterday, with the announcement of the new campaign, Scott is continuing to use the multi-faceted, extremely volatile concept of “alien”—and the blue and orange body makeup he uses as indicators of one—to make a political statement about Trump’s immigration policy, child detention centers, and, more generally, the American fear of illegal aliens.

Scott captioned another Instagram photo, of a blue-bodied Gigi Hadid in an orange Moschino coat and black bag and hat, with a longer discussion campaign’s project: “WHAT IS AN ‘ALIEN?’ THE CONCEPT OF MY AD CAMPAIGN IS TO BRING ATTENTION TO THE US ADMINISTRATION’S HARSH STANCE TOWARDS ‘ILLEGAL ALIENS.’ I PAINTED THE MODELS IN MY SHOW AND THIS CAMPAIGN AS A WAY TO OPEN A DISCUSSION ON WHAT EXACTLY AN 'ALIEN' IS - ARE THEY ORANGE BLUE YELLOW GREEN? DOES THIS MATTER? THEY ARE OUR FRIENDS, NEIGHBORS, CO WORKERS, RELATIVES AND PEOPLE WE LOVE.”

The collection is part investigation of old conspiracy theories and part commentary on the political climate in which we are living.

This content is created and maintained by a third party, and imported onto this page to help users provide their email addresses. You may be able to find more information about this and similar content at piano.io
Advertisement - Continue Reading Below
More From Fashion
Your Fall Wedding Outfit Cheat Sheet
A Puffer Jacket Is Your Winter Essential
Advertisement - Continue Reading Below
The Top Fall 2021 Handbag Trends
Refreshing Ways to Style a Cardigan
The Foolproof Guide to Cleaning Your Jewelry
Nordstrom's 2021 Anniversary Sale Is the Best Yet
Hats That Will Make a Statement—In a Good Way
The Most Exciting Jewelry Trends for Fall 2021
Maxi Dresses That Work for Every Occassion
The 100 Best Shopping Sites to Browse Through