You might have heard—the Trumps have touched down in London for their official UK state visit. One of their very first stops is, of course, to see Queen Elizabeth and the rest of the royal family, and on Monday night they all enjoyed a banquet together. The banquet is being held at Buckingham Palace, and is being attended by around 150 guests, including Prince Charles, Prince William, and Kate Middleton. Prince Charles and Camilla were one of the firsts to greet President Donald Trump and Melania, along with Queen Elizabeth, and they all took a photo in the ballroom of Buckingham Palace.

The group all wore coordinating white outfits, with the men in black-and-white tuxes while the women all wore white dresses. Melania paired her floor-length gown with white gloves, as did the Queen herself.

Kate Middleton was later spotted on her way to the event, also wearing a white dress.

It's interesting to note that all the women decided to rock the neutral hue, as the dress code for the white-tie affair did not specify that one had wear all white. Traditionally, white tie just calls for women to be in a long gown, while men should be in a full tuxedo including a white bow tie. (For example, Birgitte, Duchess of Gloucester, and British PM Theresa May wore blue and black, respectively.)

Perhaps the royals coordinated with Melania Trump on wearing white as a courteous move? After all, the color is smart and elegant for formal affairs.

"I agree it would appear as if there was an agreement that all the royal woman would wear white and Melania was advised to do the same, but I really think it is a coincidence," said MarieClaire.com's exclusive royal wedding expert and British bridal designer, Caroline Castigliano. "The royals often wear white to the state banquets and I wonder if this is partly to show off their sashes. Kate wore her blue sash tonight for the first time that symbolizes her role as a member of the Royal Victorian Order."

The irony of everyone wearing all white isn't lost on political watchers; the color has been used by different groups as a form of protest. During President Trump's State of Union address in February, many Democratic congresswomen wore white, the color adopted by the suffragist movement, to pay homage to that and their fight for women's rights. (The Trump administration is currently threatening the very existence of Roe v. Wade.) In addition, Alexandria Ocasio-Cortez made a sartorial statement by wearing a white suit to her 116th Congress swearing-in ceremony. And going even further back, Hillary Clinton wore white to Trump's inauguration.

It should be noted that the Obamas also wore white when they attended a state banquet with the Queen in 2011...so maybe everyone just loves this hue for royal parties?

Counterpoint: Melania and Camilla also wore white for a daytime excursion prior to the banquet itself. 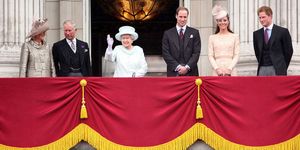