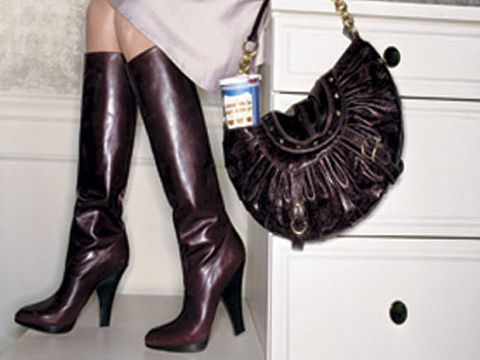 In the post-bling age of designers with DJs, pop stars with labels, and hip-hop lyrics that squeeze Gucci, Fendi, and Bur-berry into one sentence, the relationship between fashion and music has never been stronger. On the catwalk, music decodes the collection, but be forewarned: The thumping heartbeat that gooses the models will also weave its spell on you at point of sale. Being so ramped up by disco that you're practically doing the pony in the dressing room can be dangerous to the pocketbook. I set out to explore the melodic manipulation and see how stores go from cha-cha to ka-ching.

Uptown luxe is traditionally associated with an intimidating cocoon of posh-piped-in music is as essential to a snooty image as the curl of the store manager's lip. But this is the new Burberry. The traditional house has been brilliantly reinvigorated by Christopher Bailey while remaining quintessentially British: contained hauteur with a dash of "oops, sorry, vicar" cheek, and the Brit-heavy music policy captures the shift. Like the collection, it resonates with London's glory days. Just as Joe Orton-style cockney hats in teal and mul-berry velvet sit alongside the tradi-tion-al cloth caps of a partridge shoot, the old-school potency of Cream, the Kinks, and the Stones dovetails with the indie smarts of the Smiths and PJ Harvey.

The brains behind the Burberry mix is Rischel Granquist, music marketing designer for Austin-based DMX. The key, says Granquist, is asking the right questions: "What do we want the music to do-evoke an emotional response? Transport the customer to a different place? How do you want to fill the space? Most important, what is the brand DNA? With Burberry it was 'classic goes new Brit': a swinging London for the naughties."

As I shrug on this season's longed-for molten-gold trench, reimagined in quilted leather, I felt naughty indeed-the spidery meanderings of the psychedelic organ in "House of the Rising Sun" doubling the nostalgic appeal, making it perfect for right now. When the high gloss of Suede cedes the floor to the glam-rock sass of T. Rex's "Metal Guru," I wonder, Should I default to the black-leather version or sell a kidney and buy both?ANN TAYLOR

"A lot of how we shop rests on how the store makes us feel, and how it enhances our self-perception. Music plays a big role in that," says Laura Paquet, author of The Urge To Splurge. So what does it say about the Ann Taylor shopper that the sounds are provided by Musak, once a synonym for predigested kitsch-by-committee? "That's history, with no bearing on Musak today," laughs Dave Keller, creative director of what is now known in their culture as "audio architecture." He explains that once music in public spaces moved from the background to the foreground, Musak evolved with it. "My people are hip, tuned-in music freaks," he insists.

The clothes here are about sym-metry: crisp basics in brown and black, and Musak has customized the music with the same across-the-board appeal in mind (other clients include Armani Exchange, DKNY, and Liz Claiborne). "The artists are mostly female," the store's affable manager tells me. "When male, they must be singing about love or getting dumped." This month's recipe: Jewel, Sarah McLachlan, Annie Lennox, and Dido, along with the occasional SoCal classic from Fleetwood Mac. That is, folk stylings with verses as neatly arranged as the merch.

But Keller doesn't see what he does as a science. "That has Pavlovian implications. It's not, 'Play Madonna and they will salivate.' It's more of a design process," he says-before adding somewhat cryptically, "We understand the essential attributes of the Ann Taylor brand, and we support and amplify what goes on in the store."

The rebirth of the outdoorsy casual-wear label is totally incarnated by the in-store experience, which is equal parts Mayfair gentlemen's club and nightclub at full-tilt boogie.The exclusive feel of the bitter-chocolate walls, potted palms, and overhanging moose head already makes me want to spend big. A Mark Beard mural snakes around the entire ground floor, conjuring the homoerotic languor of Brides-head Revisted. It's all Oxbridge privilege: nude swimming, punt races, and the fleeting, sepulchral beauty of boys in boaters. This visual is underscored by the fat, wet bass line that fills the store with energy, sucking people in off the street. Over a slick Pet Shop Boys remix, a handsome shop assistant with an irony-fro assures me, "There's always a thumping beat."

The vibe is a booster shot for the clothes. Denim so distressed it's distraught; hooded sweats and sentinel shirts that can take you from couch potato to street stroll. The store teems with clean-cut 20-somethings, teens, and the credit-card-carrying parents who love them. While the music bounces off the walls, the knit tees fly out the door.MACY'S

At the flagship Herald Square store in New York, past the dove gray and mushroom of Calvin Klein in womenswear, it's a girly party on the fourth floor. 50 cent cockily drawls over choppy violins: "We're gonna party like it's your birthday/Sip Bacardi like it's your birthday," as everybody to and fros in time.

Customers are here in search of a wardrobe that ticks all the boxes of high-street fashion, with its MTV-global sweep. Among the fake-fur vests for $68 and racks of babydoll party dresses in confectionery colors, an unmistakably live shout-out goes over the sound system to a nubile customer, "Nareen." DJ Blaze, on mic, behind glass, has been spinning in the Macy's DJ booth for four years. He keeps the floor pulsing with hip-hop, R&B, and reggaeton, doing the one thing a compilation cannot: reading the room, cranking the music when it gets more crowded. The wall is lined with albums signed by the celebrities who come to the floor to promote their lines, like Beyoncé, Missy Elliot, and J.Lo (who likes him to spin her music only). Girls pile in, from preteen to late 30s, from noon to 8. Blaze knows how to pump them up and get them shopping. His reward? "I've never dated so much in my life," he reports. Macy's reward? It almost goes without saying: Free-spending, bopping shoppers who say with every purchase, "I'm with the brand."

"Pullin' Me Back" Chingy

"Don't Stop Til You Get Enough" Michael Jackson

This content is created and maintained by a third party, and imported onto this page to help users provide their email addresses. You may be able to find more information about this and similar content at piano.io
Advertisement - Continue Reading Below
More From Fashion
Failsafe Gift Ideas for Everyone on Your List
Snag Some Adorable/Sexy New Lingerie (You Pick!)
Advertisement - Continue Reading Below
Le Specs Are Up to 70 Percent Off for Black Friday
The Bright Red Sweater That's Actually a Neutral
Prepare Yourself for Everlane's Black Friday Sale
30 Wedding Gifts They'll Love...and Actually Use
Your Go-To List of the Best White Sneakers Ever
A Puffer Jacket Is Your Winter Essential
Replenish Your Underwear Stash With Fresh Options
White Outfits That Are Perfect for Winter