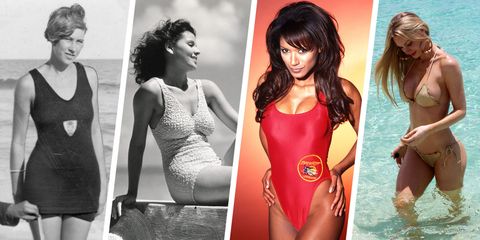 Over the past few centuries, there's been no garment more telling of the times than the swimsuit. So, with beach season nearly upon us, we're looking back on all the styles throughout the years and the significance of each, including the suffragette one-piece, the first bikini ever, and of course, the free-the-hips Baywatch suit.

At the beginning of the 19th century, when swimming started to become recreational, ladies braved the waves in face-protecting bonnets and long dresses that protected their skin. (Yes, it was all about that pale skin.) To keep their bathing dresses from floating up (and keep their legs covered), women would sew weights into their hems. Uh, all we can say is, good luck swimming.

In the 1850s, drawers/bloomers were added to the garments as a precaution for accidental exposure. Towards the end of the century, the dress style graduated to the "princess," cut, which was a one-piece fitted blouse and bloomer-like trousers combination.

Thanks to the influence of Hollywood, swimwear started to become more fashionable, but was still relatively conservative. By 1920, popular styles covered women from the neck to the knees and were gradually working their way up. A popular swimsuit brand of the time, Jantzen, was known for its "Red Diving Girl" logo, which was a symbol of feminism by way of the waters. Alas, beaches across the country would still censor the styles with suit regulations.

In the '30s, limbs were finally set free with silhouettes that were flattering and let the body breathe. Later on in the decade, many styles were made of Lastex, an elastic-y woven satin that was far better suited for beach elements.

In 1946, designer Louis Reard designed the word's first bikini and fun fact: It was modeled by an exotic dancer, as the original model refused to wear it. An engineer hailed it "smaller than the world's smallest swimsuit," and named it after nuclear tests at Bikini Atoll (because boom, it had arrived).

Swimwear during the '50s honed in on curvier women, which meant working structured undergarments into the designs for shape and support. Towards the end of the decade, bikinis started to become more accepted and embraced by the mainstream thanks in large part to Brigitte Bardot traipsing around the French Riviera.

In 1964, designer Rudi Gernreich caused a worldwide stir when he introduced the topless "Monokini," a bikini with two micro halter straps, that was denounced by the Vatican and illegal on most public beaches around the world. However, more modest styles of the cut-out swimsuit were unveiled and it was one of the most popular styles.

At the height of a sexual revolution, the swimwear styles boasted barely-there cuts in a variety of fabrics including fringe and crochet. In 1975, the famous poster of Farah Fawcett in a red one-piece swimsuit (slightly reminiscent of that of The Red Diving Girl) sold 12 million copies and showed off more of an all-American girl aesthetic.

Much like the clothing of the '80s, the styles were Rainbow Brite-hued, printed, and decidedly body-baring. The trends of the time were no doubt influenced by Hawaiian Tropic's annual bikini contest, in which they held competition for women to serve as spoke models for the brand. Since 2008, the contest has ceased to exist.

'90s swimsuits were nothing if not an ode to the crotch with their high, hip-baring rise. This is due in large part to the Baywatch babes who put their hip bones on full display in their iconic red one-piece swimsuits (there's a historic pattern forming, no?).

Today, swimsuits are kind of a free-for-all with trends ranging from the high-waisted bikini à la Taylor Swift to the G-strings beloved by The Sports Illustrated cover girls. The cool part is that there's a million different ways to make a statement—and now we know the evolution that got us there.

The History of Women and Their Eyelashes

The History of Women and Their Eyebrows