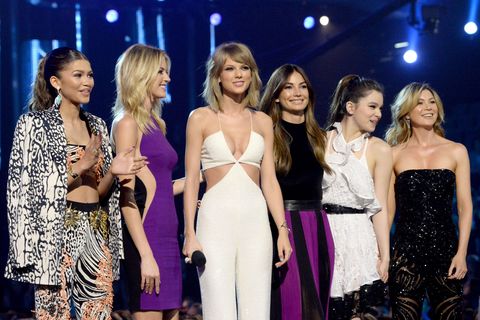 In my last analysis, I argued that Taylor Swift's underground network of famous girls is a lot like a centuries-old secret society that leaves pointy shapes lying around everywhere and controls world events through subliminal messaging in Beyoncé's music. I take it all back.

They're too advanced to compare to the Illuminati now. In a few months, they've evolved into a well-trained ensemble of elite boxerinas/munitions experts who run through walls like they're Kleenex. There are so many of them they have to serve *two* birthday cakes at any given celebration. But they're not to be feared. No—they're to be studied because, along with a femur-shattering roundhouse kick and an immaculate matte red lip, they've mastered friendship.

Here, we've created a guidebook on how to assemble, lead, entertain, and discipline your own squad—just like Taylor.

You still text/talk in person? How quaint.

To increase your numbers, have your squad infiltrate other squads

The nice way to put this: cross-squad pollination. The realistic way: a hostile takeover the other squad didn't know was hostile until it was too late. (Except they'll enjoy the cookies and streamers and stuff, so it's all cool.)

Add new squad members, but keep the old (as part of your extended squad)

In inferior squads, the protocol would be to test an extended squad member's loyalty by leaving your phone unattended or an already-opened pack of Oreos out in the open. But if you want to follow Taylor's lead, you'll arrange a surprise Dashboard Confessional concert...because, weirdly enough, you trust them.

Ten out of 10 workplace experts are like, "Whaddidtell you" right now.

Give them something to believe in—besides you, of course.

Literally. (Look at Lorde.) Especially when they've all confirmed receipt of your mental iMessage to wear neutrals/denim/stripes.

Chelsea Peng I'm Chelsea Peng, the assistant editor at MarieClaire.com.
This content is created and maintained by a third party, and imported onto this page to help users provide their email addresses. You may be able to find more information about this and similar content at piano.io
Advertisement - Continue Reading Below
More From Celebrity
How the Queen Ends Awkwardly-Long Handshakes
The Queen Has a Rule Against Bad Talking Family
Advertisement - Continue Reading Below
The Queen Took a Pic of Philip With Her to Funeral
The Queen's Tolerance Was the Key to Her Marriage
J.Lo "Likes" Shady IG Post After A-Rod Split 👀
Beyoncé Shares Photos of Her White Power Suit
Will & Kate Welcomed Harry Back Into Their Group
Queen Left a Handwritten Note on Philip's Coffin
The Queen Said Grief Is the Price We Pay for Love
All of the Photos from Prince Philip's Funeral