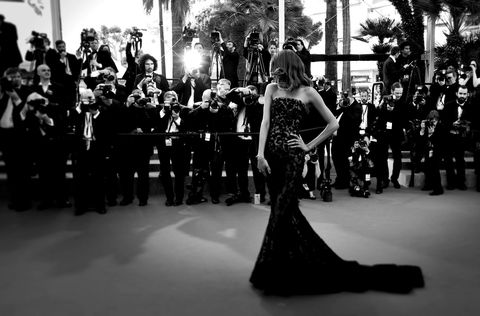 When we click through a best-dressed gallery or watch Beyoncé roll up to the Met Gala an hour after everybody else on Periscope, we're only seeing a finished product, not the months of preparation, politic maneuvering, and artistry that go into its creation.

Ahead of Sunday's Emmys, we bring you the SparkNotes version of last month's feature on the high-stakes, high-reward game Hollywood stylists play. Bonus: Make it a double, and you'll know more about famous people's underwear than any of your friends. 💁

1. The stylist's ultimate goal is always to get his or her client on the best-dressed list.

It's all about "when you open the trades the next day and the trades, the magazines, are talking about her," says Eric Archibald of his client, Jennifer Hudson. "When you're on the best-dressed list, you know you made the right decision."

2. The most carefully laid plans can—and *do*—fall apart at the last minute.

Even after selects have been made and seamstresses flown in from Paris to take up hems, there's still time for stylists catering to stars higher up in the pecking order to throw their weight around, sending their counterparts scrambling to find a totally new dress at the last minute because a bigger VIP decided to wear the first one. "The bigger the name, the bigger celebrity, the more they can get away with," Archibald says.

3. On the brands' end, they have to calculate how lending a dress could help or harm *their* image.

A representative for Elie Saab once told Vanity Fair of the label's no-B-list-actresses-allowed policy, lest an errant former child star's red carpet appearance put women off their designs for good.

4. Choosing a certain gown or piece of jewelry can mean $$ for the celebrity *and* the stylist.

Six-figure deals brokered between fashion houses and celebrities (one digit less for the stylist) aren't exactly a secret, what with reports of Jennifer Lawrence inciting a bidding war between jewelers and Tiffany & Co. paying Anne Hathaway $750,000 to wear its $10 million Lucida Star necklace to the 2011 Academy Awards. As Jessica Paster said at the Vulture Festival's Hollywood Power Stylist Panel earlier this year, "If it looks awful on you, $100,000 or $250,000 is not worth it, but if it looks gorgeous and this is the dress you were going to pick anyway, why not get paid?"

5. It can also take an up-and-comer and turn her into a bonafide Movie Star.

A Balenciaga-packed promo tour can launch an ingénue with a 4-inch IMDB filmography to the next level. But like the meme-y millennial rant "need a job to get experience/need experience to get job," actresses need to have clout to access to the best stuff, with which they win more esteem.