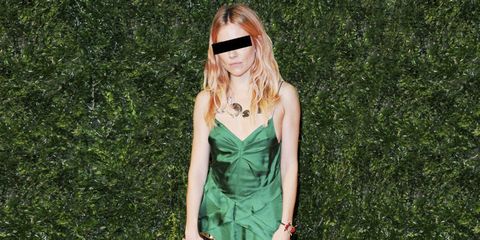 Satin or any other shiny, stiff fabric that wrinkles faster than you can say "more steam!"

Satin is like a tiger cub you rescue and raise in your own home—it's cute and all, but at any given moment, you can't predict whether it's going to cooperate or Siegfried and Roy you. It's also a fluffer's nightmare because of its tendency to hold creases, which is why sometimes you'll hear about celebrities lying horizontally in the backseat of a car so they don't get chewed out the next day for the fabric having been bunched unattractively (good luck with that). The risk is just too GD high.

A simple, Carolyn Bessette-Kennedy-esque dress can be hella chic IRL, but in photos—if there's no shine, unusual cutout, or another element that adds visual interest—you might as well have not been there.

An outfit that's not fitted anywhere

To test super stylist Kate Young's theory that "any unnecessary volume photographs as a bigger body," let's use the very tall, very slim Cate Blanchett as our case study. In 2013, she wore the quilt from the Roseanne Barr's couch (as interpreted by Raf Simons for Dior couture) to the Deauville premiere of Blue Jasmine. Here is the best photo.

Here is a different photo.

Here it is moving.

Cate DGAF that she looks more pregnant than she really is in some shots, but remember: Not all of us can be statuesque elfin queens who bathe in $26-an-ounce SK-II essence.

Something someone else has worn before

Stylists have been fired for this exact reason, but with issues of timing (your client getting the call that she's performing at the Oscars two weeks before) and the whole "need to be famous to get a nice dress/need a nice dress to be famous enough to get more nice dresses" conundrum, it's the best they can do sometimes.

So that a pair of fad-y-but-bulky granny panties doesn't sabotage their efforts, stylists go through the trouble of buying Cosabella G-strings, Calvin Klein Invisibles, and Commandos for their VIPs. Butt-floss isn't the most comfortable to wear, but hey—that's the smooth, compact world we live in.

My wardrobe for today's shoot. A vag cover.