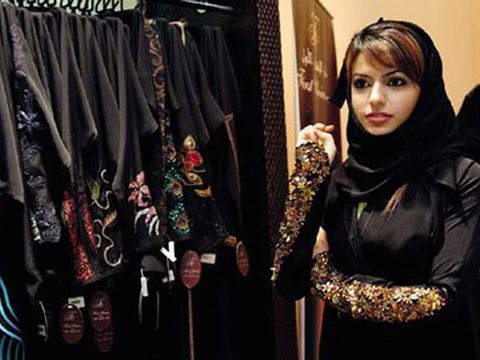 On paper, Muna bin Kalli and Maryam Al Hamly sound like they could be two of your closest friends. Their local shopping ground is the world famous Mall of the Emirates. Al Hamly, 24, is in PR; bin Kalli, 22, is an events coordinator. In their downtime, they like to watch TV and dish about their favorite shows. In fact, bin Kalli is addicted to Desperate Housewives. "It's hilarious," she says. "It's so real. You can relate it to your daily life!" Their daily lives, however, are no Wisteria Lane. Al Hamly and bin Kalli live in Dubai -- one of seven city-states that comprise the United Arab Emirates, a Muslim country situated just east of Saudi Arabia on the Persian Gulf. The events bin Kalli coordinates are for the Dubai Ladies' Club, an organization run by Sheikha Manal bint Mohammed Al Maktoum, the daughter of the ruler of Dubai. As for the mall, besides retail options ranging from H&M to Ralph Lauren, it also boasts an indoor ski slope with actual falling snow, 7,000 parking spaces, and -- well, you've probably never heard of their favorite store: The First Choice, which sells abayas and shailas, the black robes and head-scarves bin Kalli and Al Hamly wear every day.

Dubai doesn't have fashion police -- or religious ones. Bin Kalli and Al Hamly aren't required to wear these robes; they choose to. "We're proud to wear the abaya," says Al Hamly. "It represents our culture. We can look glamorous and good and still be covered up." "Dubai is an expanding city -- there are more expats than locals now," bin Kalli adds. "The abaya helps us differentiate ourselves from the nonlocals." To American women used to staring down a dizzying merry-go-round of new colors and trends each season -- Nautical! Menswear! Bohemian! -- an abaya could seem like a relief: insta-wardrobe. But as it turns out, buying one isn't quite that simple. First, it's more a bespoke process than off-the-rack. Consider the fit: "We don't have 'mediums' or 'size 12s,'" says Al Hamly. "Each shop has a special tailor who measures you every time you go. The only rule is that it's comfortable. They make shorter abayas to go with short heels, longer ones for higher heels." Nor are abayas and their accompanying shailas meant to be humorless shrouds. "My favorite head-scarves are by Moschino," says bin Kalli. "They make ones with hearts or peace signs on them." But, she adds, "If you want to be noticed, you wear Roberto Cavalli." Noticed? In a black robe that shows only your hands, feet, and face? Indeed, in Dubai, wearing the abaya does not have to mean eschewing fashion. On the contrary, the style of robes and head-scarves women wear -- to say nothing of the makeup, jewelry, and handbags they accessorize with ("We spend a fortune on handbags," confides Al Hamly) -- combine to make a declarative fashion statement.


GLAMOUR IN THE GULF

Abayas, when worn in public, are always black. (Jalabiyas, on the other hand -- the Arabian-style dresses women typically wear to entertain guests at home -- are sold in every color of the rainbow.) An "everyday" abaya, which costs between $80 and $190, is usually made of crepe. "It's the fabric of choice for Gulf women," says Al Hamly. This regional preference has nothing to do with the heat, which can reach an oppressive 120 degrees during the hottest months. Rather, crepe -- or krebe, as it's known here -- is slightly stretchy (read: less likely to rip), and it irons well. (Important since women in Dubai typically wash their abayas every three days or so, with special detergent formulated not to fade the black color.) Still, even in a country where black is the new black, a woman can have a little fun. "You can play around a bit with the style to be different," says bin Kalli, whose favorite casual abaya has denim embroidery on the sleeves. Then there are special-occasion abayas: often a base of delicate black chiffon, transformed -- by way of colorful embroidery, Swarovski crystals, and hand-beading -- into a couture-quality work of art. "Normally, we wear abayas that are decorated with lots of color at weddings," says bin Kalli, "or to the kind of gathering where girls get together." These black-tie versions are costly, though: They run roughly 4000 dirhams ($1,000 U.S.) a pop. Nevertheless, just as in the West, women in Dubai are prepared to hand over the money if it helps them stand out. In fact, the pressure to look original is so intense that Al Hamly and bin Kalli often forgo the mall and import instead: "I shop for abayas that make me look different from other women," Al Hamly explains. "Some I order special from Saudi Arabia." The process can also be secretive: "Certain girls are reluctant to reveal where they had their abayas made, because they fear someone will copy them," she adds. To thwart the competition, women tend to buy from artisans who design right out of their homes.


DOES MY BUTT LOOK BIG IN THIS ABAYA?

The latest abaya craze in Dubai is the "butterfly" cut, which flitted onto the fashion scene about six months ago -- though its inspiration, Al Hamly believes, is much older. "There used to be a one-piece abaya that older women wore," she says. (Meaning there was no separate head-scarf; you simply threw the fabric over your head.) The butterfly, it seems, grew out of that cocoon. Cut like a Batman cape, from behind, the butterfly abaya gives the appearance of wings. Al Hamly already has one on order: "It has gold lining around the edges. The head-scarf has different shades of bronze- and gold-colored Swarovski crystals to give it a metallic feel," she says, adding, "it will go really well with my bronze Balenciaga bag!" Still, she does admit to some trepidation over the new trend: "I'm not sure if I'll have the courage to wear it," she says. "The butterfly cut tends to look best on tall, thin girls. It might make me look wider."

Beyond the fashion deliberations, wearing a floor-length black robe does present certain practical concerns: Abayas tear easily -- especially if you're a working girl. "They get caught in the wheels of our office chairs, and you can't really mend them," says bin Kalli. As a result, women tend to buy new abayas monthly. "I have no idea how many I own," says Al Hamly. "More than 30, combined with those I share with my sisters." Adds bin Kalli: "How many do I own? How many pairs of shoes does Carrie Bradshaw own?"

Sex and the City aside, Emerati women pay close attention to global trends. "Westerners think we're oblivious to what is happening style-wise, but we're very keen on educating ourselves about fashion," says bin Kalli. "One of my favorite channels is E!, just to see what's going on and what Jessica Alba wore to the Oscars." Such informed consumerism has led to fashion-forward abaya trends not found elsewhere in the Middle East. "There's a big difference here," acknowledges Al Hamly. "If I wore an abaya with color on it in Riyadh, they would freak out!" "The abaya is our fashion, not just our religion," adds bin Kalli. "We even get compliments from Western expats living in Dubai. One woman thought my shaila was so pretty, she asked me where she could buy one."