Innately tied to her memory is Princess Diana's fashion sense, which changed as she grew into her role as as a beloved public figure. Here, a look back at 50 of her chicest outfits.

BBTB. (Bring Back the Bolero. Please sign my petition.)

Not what you expected, eh? That's what makes it so great and modern, as the celebrity-off-duty look in beta. Or alpha.

Not an ad for Yves Saint Laurent, but very well could be.

Another wonderful evening option, this one with an off-the-shoulder neckline and yards of pink satin.

But our very favorites might be the ones in simpler silhouettes, which she tended to favor later.

Though velvet is never a bad idea.

How is this real?

Versus an interesting juxtaposition—even just in her sartorial choices, she grew so much in a few years.

Even in costume—at a Canadian barbecue, no less—she looked like a queen.

BBTH. (Bring Back the Halter. Sign my other petition.)

So '80s, kind of frivolous, but still marvelous.

It might not be your first guess, but red was definitely one of Princess Di's best colors.

If it isn't there already, this fire Christina Stambolian number will live in the "fashion" section of your brain forever. Phew.

Raise your hand if you're having an extremely rough time deciding whether '80s or '90s Diana is the best.

I love this period in her style. Too chic.

Ideas in styling: Wearing a necklace as a headband and a massive bow on your shoulder.

Before it all began.

Versus near the too-soon end.

And now, let us admire some headwear, starting with schooner of a hat.

And this jaunty, feathery chapeau. 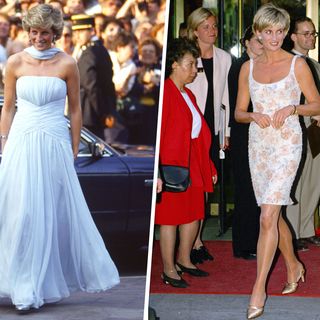