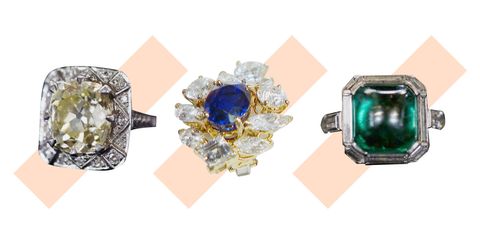 As an unabashed fan of PBS's Antiques Roadshow, I am here to tell you, my fellow millennials, two things: A) Watching this show is the only way to get through 2017 in one piece, and B) It's featured some of the most stunning jewelry your eyes will ever behold. Which makes sense—Antiques Roadshow showcases long-forgotten gems that wouldn't otherwise see the public eye. Here's the best of the best. (By which we mean the most $$$ of the $$$.)

About: Circa 1930, this canary yellow diamond ring was passed down through the owner's family—and is absolutely massive for a yellow Asscher-cut diamond. To quote the appraiser: "It's very hard to get that combination. I've had only one small one in 26 years in the business. So that tells you it's rare." Even cooler, the $75-$100k value was considered "very conservative" back in 2006, so in today's market this thing is likely through the roof.

About: This Asscher-cut ring is even more valuable than the one preceding it. For starters, it's a little older—hailing from 1915. The piece comes care of the owner's grandfather's jewelry store, weighs approximately five carats, and is described as a "very, very clean stone." And yes, the appraiser completely nerded out, saying: "That's quite a ring you've got there. I mean, we don't see rings like that."

About: This lovely family heirloom is a gorgeous example of Art Deco jewelry, and was made somewhere in the 1920s-30s. The center emerald is a "sugarloaf cut" (intended to maximize the green tone), and has bullet shaped diamond baguettes surrounding it. The piece itself is most likely American (though the stone is from Colombia), and thanks to the Art Deco market peaking, it was given a huge price tag.

About: This circa 1915 necklace was purchased by the owner's husband in the late '70s to early 80s, and he paid just over $3,000. So yeah, it has a pretty hefty mark-up. The piece itself is made from black opals known as "patchwork opals"—and not only was it signed by "Tiffany & Co," it was also signed by man/myth/legend, Louis Comfort Tiffany.

5 of 15
Diamond and Pearl Necklace

About: That's right: $250,000. This stunning necklace was passed down through the owner's family, and hails from New York company Phelps & Perry of Maiden Lane. The circa 1905 piece uses Edwardian platinum, and the diamonds are massive—the larger of the two being five carats. At the time it was appraised, the diamond market was pretty volatile, so you can only imagine the estimate in 2017.

About: This massive diamond ring is a whopping 7 carats, and was made in 1925, retailing for $1,000. Interestingly, the eight-prong setting indicates that this ring was intended for a man rather than a woman. It was originally mis-graded before the owner brought it into Antiques Roadshow, where she found out it was worth up to $80k instead of just $20k.

About: This lovely 6.5 carat ring was made in 1900, and is what's referred to as an "old mine cut"—meaning there are fewer facets. "It is a really pretty piece, just the center stone as is," explains the appraiser. "And what's nice is, it's not in a yellow mounting or setting that would amplify the yellow. It's actually in a platinum-and-diamond Edwardian setting that complements it beautifully."

About: This 3.4 carat "fancy" "intense" engagement ring was made in New York City in the roaring '70s, and definitely lives up to its name. The value comes from the gorgeousness of the stone itself, set in a "modern round brilliant cut." We'd like five, please.

About: This Tiffany necklace is signed a whopping three times (making it extra special), and was created by one of the company's best and most famous designers Paulding Farnham—who was known for his love of natural pearls. The owner plans to have her daughters wear the necklace at their weddings.

About: These earrings contain six carats of sapphire and six carats of diamonds (casual)—and belonged to the owner's grandmother's sister. In other words, they go way back.

About: This necklace dates between 1900 and 1908, and is made of black opal, as well as Russian demantoid garnets—the most rare green garnet in existence. Just based on historical significance alone, the piece is worth $8-10k, but the fact that it was made by Tiffany & Co increases the value to $15-20k. The thing is, this piece was *specifically* made by Tiffany himself, which makes it even more valuable.

12 of 15
Ruby and Diamond Necklace

About: This piece dates to about 1918, and is what's known as a "transitional" piece in terms of design. It has Art Deco elements (like the baguette diamonds), but also scrolling motifs that give off more of an Edwardian vibe. And while the diamonds are great, it's the three carat Burmese ruby that's the real showstopper—hence the high price tag.

About: This gorgeous necklace was bought at NYC's Van Cleef & Arpels by the owner's father-in-law in 1960. Amazingly, it was actually custom-made based on a sketch that the buyer drew. The diamond weighs 3.91 carats, and is flaked by smaller stones—and believe it or not, it only cost $5,700 at the time.

About: This necklace and ring were bought by the owner's grandmother before 1949, and weren't actually part of the same set. The ring is platinum-topped gold with a Burmese sapphire surrounded by diamonds, and dates from 1910-1915. It's worth between $25-35k. Meanwhile, the necklace was made to go with the ring in the 1920s, and is worth an additional $30-50k. The pear-shaped drop alone has two and a half carats of diamonds, while the tassel is decked out in sapphires.

About: This lovely engagement ring (from the owner's husband) is hilariously referred to as a "fat pear" in terms of shape—and weighs five carats. The ring is Art Deco in aesthetic, and was made in America by little known designers K and F and Company.

Next
Your Complete Guide to Fall Fashion 2017 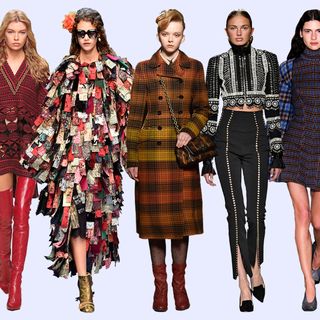 Advertisement - Continue Reading Below
This content is created and maintained by a third party, and imported onto this page to help users provide their email addresses. You may be able to find more information about this and similar content at piano.io
More From Fashion
Summer Color Trends That Double as Mood Boosters
Bucket Hats to Top Off Any Outfit With
Advertisement - Continue Reading Below
Found: Long Pendant Necklaces You'll Wear Forever
What Joey Wölffer Wears to Work
The Best Watches Seen at Watches & Wonders 2021
Madewell's Spring Sale Is Giving Me Life
How to Make Biker Shorts Fashun
Fine, Rihanna, I'll Buy a Leather Blazer Too
Bella Hadid Wore Low-Rise Von Dutch Jeans
These Celeb-Loved Leggings Are on Super Sale