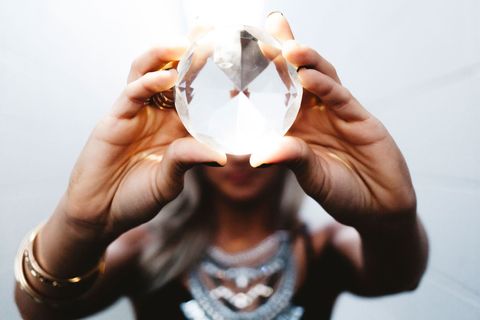 If I told you that finding a boyfriend (or girlfriend) is as easy as carrying a rock in your purse, you'd probably roll your eyes and move onto the next story faster than Leonardo DiCaprio moves onto his next lady love. But celebs like Miranda Kerr, Katy Perry, Kiersey Clemons, and most recently Adele, have opened up about turning to crystal therapy for things like love and wellness. And, well, isn't that some sort of endorsement?

I'll admit using rocks for medicinal purposes may seem as useful as drinking a cup of decaf for an energy boost, but if it works for Adele then I had to try it. Before getting started, I asked Heather Askinosie, co-founder of crystal store Energy Muse, how the therapy worked. She explained the healing process begins simply by touching the stone, which connects you to the earth's energy. Not sure I entirely know what that meant, I asked her how to best utilize the stones to get a desired outcome.

"She explained the healing process begins simply by touching the stone, which connects you to the earth's energy."

Askinosie said that most beginners connect to a tumbled stone before advancing to raw crystals or jewelry. She advises setting your intention with each rock before reconnecting with it throughout the day, which can be done by wearing jewelry, performing a ritual, or even just carrying it with you. Deciding to go the beginner route with tumbled stones, I found a store in my area and had a quick consultation with the associate. As he explained the best crystals for my purposes, I couldn't help but wonder if he really bought into the whole thing. Having a serious discussion about how a rock could bring love into my life felt way too weird. I finally settled on three crystals based on what I was looking for: more energy, more love, and better productivity.

If summer bodies are really made in the winter, then I am *months* behind, as the only thing I worked on all season was my sweater bod. Running makes me pray for the sweet release of death, so I wanted a crystal that would get me through the tough workouts. The sales associated suggested Carnelian, which according to the little card displayed alongside the basket of the reddish orange stones, is good for sexual energy. Hmmm…okay, so if the love rock works then maybe I'll need this too. But since it's also good for overall health and creativity, I figured it would come in handy regardless. After being sick for nearly a week, I returned to the gym with my Carnelian stone, determined to jog at least two miles even though I still wasn't 100 percent. I put it in the tiny pocket of my yoga pants and started running. Of course I wanted to stop and go home a few minutes in (like always), but I kept going and felt surprisingly good for being sick all week. I even surpassed my goal of two miles, so maybe there's something to the healing powers of crystals.

As I prepped for a girls' night out, I held two rose quartz crystals in my hand and visualized meeting a handsome stranger. Slipping them into my pocket, I occasionally held the stones as I bar-hopped across the city. At one point, I noticed a guy checking me out. Turns out, he was a Tinder match I spoke with before deleting the app. We talked for a few minutes, but there was definitely no love connection. At the end of the night, a very cute guy made convo about my drink of choice—whiskey, always—while I waited for my friend to return from the restroom. We chatted for a few minutes before my friend finally emerged and explained she didn't feel well as she made her way to the exit. Of course I jumped up to make sure she got home okay (even though she insisted I go back and flirt with the cute guy). It just didn't feel right to ditch my friend for a cute stranger, so alas, no love that night. I did carry Rose Quartz around all week hoping I'd bump into another hottie with no luck. 😒

"I wanted to feel less distracted, more creative, ace an upcoming job interview, and basically be the writer equivalent of Beyoncé."

I explained to the shop guy that I wanted a stone to help me be productive. I wanted to feel less distracted, more creative, ace an upcoming job interview, and basically be the writer equivalent of Beyoncé. If a crystal can really do all that, then I am building a shrine for them in my house. (Hell, I'll use them to build a house.) He suggested Fluorite Octahedron, a small light green stone that would help me focus and achieve greater wisdom. For a full week, I worked away while the Fluorite sat on my desk or in my pocket. I wish I could say the crystal kept me in the zone, but my mind often wandered, and I still found myself chatting on Facebook. I did keep the Fluorite in my pocket during a job interview, which seemed to go well, but I'm still waiting on an offer.

So do I feel like a week of crystal therapy changed my life? Absolutely not. But I will say I got sucked into hours of shopping for crystal jewelry online. Because even if they don't have healing powers, the stones are pretty, and there's something reassuring about having your own good luck charms on hand, even if it's all a lie. (Plus, did you miss the part about more sexual energy? I'm definitely down with that placebo effect.)