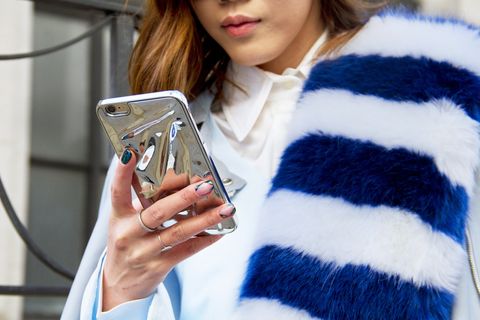 Next time you find yourself deep in an Instagram hole, learning about the 2014 vacation of your ex-boyfriend's coworker's dog, a new feature can stop you in your tracks.

Named "App Limits," the forthcoming iPhone with iOS 12 feature is part of a new app called "Screen Time," which Apple will start rolling out in September—and the info it provides might terrify you: In "Screen Time," you can see how long you spend on social networking apps, on work-based apps like Slack and Outlook, and on streaming apps like Hulu. You can check out how long you spent on your phone for one uninterrupted period, plus how many minutes you spent on your iPhone after you had set the mode to "Bedtime." (In other words, how much time you wasted looking at dog memes when you should have been drifting off to sleep.)

Which is where "App Limits" comes in. Users spending more time than is ideal looking at @doggos_doing_things, for example (wha? me?), can set a hard stop. Let's say that I set myself to just one hour on Instagram a day, and I'm 55 minutes into an extended trawl of dog-related imagery, I'll receive a "five minutes left" pop-up.

If you have a feeling you've downloaded this before, you're probably right: Similar apps, like Moment and ScreenLimit, already exist in the App Store. The difference is that "Screen Time" is a native app, meaning it comes with your installation of iOS 12 whether you like it or not.

The tech giant announced "App Limits"—along with the arrival of iOS 12, a new MacOS called Mojave, and "Memoji"—on Monday at its world wide developers conference (WWDC), where the company historically unveils software upgrades.

Related Story
Facebook Is Coming Out With a Dating App
This content is created and maintained by a third party, and imported onto this page to help users provide their email addresses. You may be able to find more information about this and similar content at piano.io
Advertisement - Continue Reading Below
More From The Best Apps and Websites For... Everything
15 Apps to Play With Friends That Aren't Lame
The Best Workout Apps for Women Who Want Results
Advertisement - Continue Reading Below
Our Favorite Yoga Apps for Beginners
The 100 Best Shopping Sites to Browse Through
Shopping Apps More Addictive Than Reels
The Best Dating Apps for People Who Hate Them
Can't Find a Good Online Workout Class? We Gotchu
30+ Shopping Sites That Offer Free Shipping
How to Hang Out With Friends During Quarantine
The Best Group Video Chat Apps